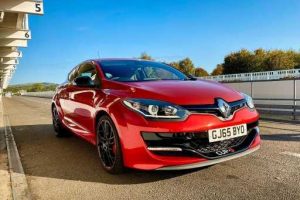 Despite being on the fleet for four months now, GJ65 BYO has covered little more than 500 miles since my last update. And the majority of those involved driving to Goodwood and back for a track day in October. On the bright side at least I managed to get one in before the year was out. Or lockdown descended.

Naturally, it didn’t take long for my first modification to occur, in the shape of a set of K-Tec Racing braided brake lines with ATE TYP200 fluid. When Dan T and I shot the Megane 275 Cup-S twin test against the FK2 Civic Type R back in 2016, the brake pedal went soft after a few too many laps of Blyton Park, so uprating them was a must for track work. I opted for Ferodo DS UNO pads up front and OEM Brembo pads at the rear, leaving the factory discs in place that are plenty capable of coping with the extra heat generated on track.

Slightly disappointed with the lack of sound from the titanium Akrapovic exhaust, I’ve since made my second modification, this time without spending a penny or upsetting anyone by butchering it. Simply removing the parcel shelf and boot carpet makes a remarkable difference to how much you can hear and now I can enjoy the Akrapovic experience properly while saving a few precious grams in the process. And God it sounds good at full throttle, snapping and crackling on overrun when it’s hot.

It had been more than a year since selling my last Megane, but I instantly felt at home back on track in another. With the Ohlins dialled into their factory recommended setting, I started in Sport mode with traction control on in the morning, having not been on circuit all year and somewhat short of confidence. However, switching traction off in the afternoon was a revelation; if anything, it gave me more confidence being able to feel traction slipping away controllably and easily getting it back by easing off the power or adjusting the steering angle.

There’s so much feedback coming through the steering wheel that you know exactly when you can push on or need to ease off in the Megane. With so many modern cars the sense of traction ebbing and flowing is voided by numb steering; not so in the Cup-S. Renault really did nail it with this car.

I’ve driven an FK8 Civic Type R around Goodwood and it’s effortlessly capable with plenty of laugh out loud moments. In comparison the Megane isn’t as composed or as fast, but it’s so much more rewarding. It’s easier to unsettle, harder to balance and so much more satisfying as a result. I came away only feeling like I’d scraped the surface of what the car was capable of and I can’t wait to get out on track again this year. The damping from the Ohlins suspension was superb, although standard Cup suspension is equally brilliant on track and I never found myself wanting in my older 250 on Cup suspension with H&R springs. I didn’t take the time to play around with the rebound settings or RS Monitor, so I’ll have to do that next time around.

Finally, to celebrate its fifth birthday, I wanted to get the belts changed early ahead of the recommended six-year interval with my track day plans for 2021. And it’s a good thing I did. Following a recommendation from a another Renaultsport fanatic, I took GJ65 BYO to independent specialist Renotech in Orpington. Receiving a phone call half-way through a job is never encouraging but as it turned out, getting my belts changed early saved me from potentially writing off my engine.

An oil leak from the rocker cover gasket had allowed oil to trickle down the back of the engine, coating the pulleys and belts in oil and deteriorating the crank pulley to the point where it could have let the belt go at any moment. A very lucky save and fantastic service from Phil, who I’ll be paying a visit to again in the not-too-distant future to have my Ohlins swapped out. But more on that next time.

Thank you to our insurance partner it’s Compare for having me along to Goodwood for their track day.