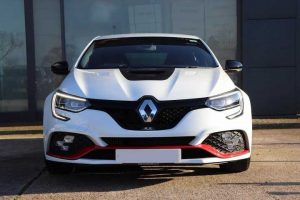 Missed out on a Trophy-R first time around? This nearly new one has almost £10k off…

For a period, many moons ago, the Renault Sport Megane could do no wrong in the eyes of enthusiasts. From R26 F1 Team to 275 Cup-S, it was the hot hatch to beat, loved by the media that borrowed them as much as the customers who owned them. It was superb: raw and exciting but also usable and dependable, the old Meganes were everything the hardcore hot hatch folk wanted.

But then the third generation of R.S. Megane arrived. Renault, understandably, was targeting increased sales with a more rounded offering. Despite a Cup chassis on the options list, it wasn't the same sort of hot hatch that had made the Megane's reputation. Not a bad one – far from it – just not the class leader it once had been, in any regard.

Then a new Trophy-R was announced, and redemption seemed to be in sight for Renault Sport. Instead of attempting anything radical as the standard car had, it employed the same methods that had made the R26.R and first Trophy-R such icons: less weight, two seats, tremendously expensive motorsport hardware and the promise of a truly brilliant driving experience. Just like the other two, the Trophy-R held a Nurburgring lap record, was extremely limited in production and even came in a silly colour scheme – it should have been another smash hit.

Whichever way you wanted to cut it, the Trophy-R wasn't received with open arms. (True enough, the R26.R wasn't either, the UK's allocation never fully selling out.) Part of the frostiness towards the Trophy-R will have been the price – kicking off at £50k and rising to £70k with options – and some of it must have been due to the drive. It was a much more rewarding driver's car than the standard Megane 280, thanks in no small part to the deletion of the four-wheel steer, but still felt more situation dependent than previous legendary Meganes had. When the Trophy-R was great, it was sensational, it's just those moments were more seldom and more fleeting than we'd all hoped for. There was also a sneaking suspicion that the world might be over two-seat hot hatches; we all loved Renault for continuing with the daftness, but a niche that was always a tough sell looked trickier than ever at its launch.

All of which has led to a bizarre situation where the R26.R is still being listed at well above its £23,815 list, despite being more than a decade old, yet the Trophy-R is being offered with almost £10k off its RRP. This one has just 1,900 miles and, although it does without the carbon wheels or ceramic brakes, standard equipment still includes Ohlins dampers, an Akrapovic exhaust and the Sabelt bucket seats – it's going to be wild enough to make a Golf GTI feel like a driving sim.

That's an almost relevant comparison, too, as this car's £42,995 asking price brings it into line with the regular hot hatches. The last Golf GTI Clubsport we tested was £42,445, for example; and though the two-seat, manual Megane isn't really a true rival for the VW, there's something far less intimidating about seeing the Trophy-R for sale a decent distance away from £50,000. It won't have been a pleasant conversation for the first owner – one of just 32 in the UK, don't forget – but this does present a very interesting opportunity for the next driver.

Because the Trophy-R is one of the most thrilling sports cars at this money. And that rather seems to have been lost in the furore around what it costs. There's some real Renault Sport magic at work here, and everyone should experience that at some point. More time with it on the road would mean a better set up could be perfected with the dampers, a dry track day or two would really show the Trophy-R off to its best, and you'll always own an incredibly rare asset; there were 575 Mini GPs allocated to the UK, by comparison, and the best part of £40k is still needed for one of those. As driving devices, the Renault and Mini aren't even close. If the Trophy-R can fit your lifestyle, it promises to be absolutely unforgettable. And how many five-door hatchbacks can that be said about?