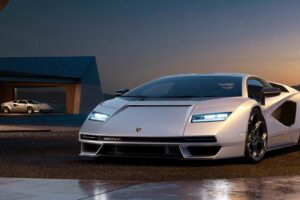 You’ll no doubt have already seen the new Lamborghini Countach. After Lamborghini teased it earlier this week, the car’s styling was leaked on social media yesterday and nearly broke the internet. It’s 50 years since the Bertone-styled Countach was first revealed, and this new model is designed to blend classic and modern Lambo styling cues.

Because it’s celebrating the earliest Countaches, the new model does without the vast rear wing and boxy air intakes that were fitted to later examples. You can see the original Countach’s influence in the wedgy shape, rectangular headlights, black side gills and the rear light clusters. It also gets a line that mimics the periscope rear-view system, fitted because rear visibility in the original car was so poor.

Like the Countach from the 1970s and ‘80s, the reborn version gets a socking great V12 engine. The venerable V12 has had to feature some electrification this time around, though, but don’t think there’s any real concession to economy. Shared with the Sian, the 48-volt electric motor is powered by a supercapacitor, and adds 34bhp to the 769bhp produced by the 6.5-litre 12-cylinder engine. Maths fans will realise that adds up to 803bhp.

As a result, the new Countach is about twice as quick as the original, with 0-62mph taking just 2.8 seconds. At full speed you’ll be travelling at 221mph. The ‘LPI 800-4’ designation also means the car is four-wheel drive, and power is marshalled through a seven-speed auto.

Lamborghini has used carbon fibre everywhere it can think of, ensuring a low-ish kerbweight of just under 1600kg. It’s apparently the cutting edge in chassis tech, and pushes the envelope just as the original Countach did with its tubular spaceframe chassis. Carbon-ceramic brakes are also fitted, and the gorgeous wheels are wrapped in Pirelli P Zero Corsa track tyres.

Inside, there are a few nods to its predecessor but, if you like ventilation, you’ll be pleased to spot that the windows open far more than in the first Countach. Other highlights in the cabin include a glass roof that can change from opaque to transparent when you press a button, plus geometric stitching and bespoke seats.

There’s far more infotainment tech on the new one, as you’d probably expect given that the word ‘infotainment’ would’ve sounded like a foreign language in 1971.

Prices are likely to be a bit chunkier than what you would’ve paid for an original Countach, too. Official figures haven’t been revealed, but, for context, the Sian costs £2.6 million pre-tax.112 Countaches will be built, and will start being delivered early next year.

Are you a fan of the styling? Tell us what you think of the new Lamborghini Countach in the comments.