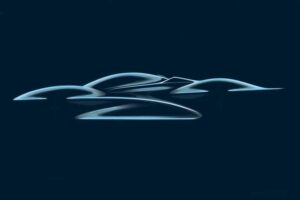 Adrian Newey’s role in the creation of the Aston Martin Valkyrie has been acknowledged from the start. But the corporate divorce between Aston and Red Bull Racing after the carmaker acquired its own Formula 1 team also ended future plans for collaboration between the two companies – with Aston taking development of what is set to become the Valhalla in-house.

This is Red Bull’s response, in the form of a fairly abstract sketch: confirmation that it will be producing and marketing Newey’s next car itself. Officially called the RB17 – explaining why Red Bull Racing’s F1 cars skipped past that number – it is set to go into production in 2025 with production limited to no more than 50 cars, and each carrying a £5m pre-tax price tag – so £6m with VAT. It won’t be street legal, although Newey has previously promised that the Valkyrie won’t be his final road car. But the RB17 does promise to be almost impossibly fast, being designed to offer the experience of a two-seat Formula 1 car.

If anybody else was promising this you’d likely be throwing bread rolls, yet Newey is both one of the most famous and talented designers in Formula 1, and also a man with an obsession with high performance machinery that goes well beyond Grand Prix racing. Remember the X2010 that Red Bull created for the Gran Turismo video game franchise? That was Newey’s take on what a no-rules racer would look like: the first sketch makes the RB17 seem only slightly less extreme.

Other details are scant at present. We’re told that power will come from twin-turbocharged V8 that will make at least 1,100hp, the RB17 will have a carbon fibre architecture, and the official release also promises “the most advanced ground effect package available in a series production vehicle,” which is a very bold claim in a world that also contains the GMA T.50, another product from the brain of a famous F1 designer – one which boasts fan-assisted boundary layer aero.

The RB17 will be developed and built by Red Bull Advanced Technology, on the same 290 acre ‘campus’ in Milton Keynes that the Formula 1 team is based on, with the two divisions working closely together. Key components will be built internally, including the car’s structure and – according to somebody familiar with the project – also its gearbox. Up to 100 new jobs will be created at RBAT to work on the car, which is a good indication that is isn’t seen as a one-off and that other projects are likely to follow.

We’re told that RB17 buyers will be closely involved with the car’s development, including simulator work and – once it is finished – track days with expert drivers. Which could come in very handy if it is indeed going to be quicker than the Valkyrie AMR Pro that I got to experience from the passenger seat last month.

But that really is the plan. “The Valkyrie AMR Pro is designed to have performance similar to an LMP1 car,” our insider told us, “but the RB17 is going to move that much closer to a Formula 1 car.”

“The RB17 distils everything we know about creating championship-winning Formula One cars into a package that delivers extreme levels of performance in a two-seat track car,” Newey is quoted as saying in the official release, “driven by our passion for performance at every level, the RB17 pushes design and technical boundaries far beyond what has been previously available to enthusiasts and collectors.”

There seems only one way to fairly decide on the relative performance of this and the Valkyrie AMR Pro, with attendant bragging rights: race!