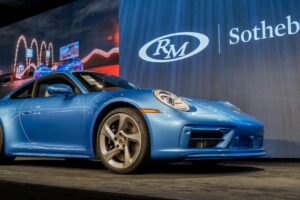 Porsche’s one-off 911 Sally Special sold at an RM Sotheby’s auction on 20 August for a whopping $3.6 million (around £3,060,000) – that’s the record for the highest-ever winning bid for a new Porsche sold at auction. The bespoke-built Sally Special attracted a lot of attention until the final multi-million dollar bid was placed by the winner over the phone.

The Porsche 911 Sally Special is a one-off version of the Porsche 911 Carrera GTS 992 based on the character Sally Carrera from the Pixar film Cars. We were a little sad to see the Sally Special wasn’t based on a 996 like in the movie, but Porsche dotted loads of unique winks to the franchise around the modern 992.

Porsche itself said it didn’t want the Sally Special to be a carbon copy of the 992 from the movie, but a representation of what she would be like if she were ‘built today as a road-approved model.’

The Porsche Sally Special is painted in a shade of blue dubbed ‘Sallybluemetallic’ and is even finished with Sally’s pinstripe tattoo at the rear beneath the spoiler. The car also sits on a set of wheels specially designed to evoke the Porsche 911 Turbo 996 on which the original Sally is based – we actually think these suit the car pretty well; maybe Porsche should consider offering these five-spoke alloys as a permanent option…

Although the interiors of the Cars characters are never seen, there are plenty of novel hints to the movies in the Porsche Sally Special. A special houndstooth fabric upholstery was developed for the car, paired with chalk-coloured leather which is embossed around the cabin with the Cars logo. There’s also a ‘Sally Special’ logo with a picture of the character on the passenger side of the dash, and the ‘Drive Mode’ button on the steering wheel was renamed ‘Kachow! Mode’ in reference to Lightning McQueen’s catchphrase.

Porsche says the car also reflects the character Sally’s passion for driving with its manual gearbox, and the manufacturer wants the Sally Special to be driven by the auction winner ‘often and gladly.’ Good luck convincing them to drive this $3.6 million one-off sports car often instead of keeping it pristine and locked away.

The winning bidder also received a custom Porsche Design watch, designed with input from Pixar, a bespoke Porsche Tequipment car cover, a spare set of wheels, and a book about the development of the Sally Special including original drawings.

The proceeds from the auction are going to two charities supporting young women – Girls Inc. and USA for UNHCR. Girls Inc. is a charity that raises money to help educate and support young girls so they can reach their full potential and become world leaders. USA for UNHCR helps support refugees fleeing the conflict in Ukraine, the majority of whom are women and children who have been displaced and separated from their families.