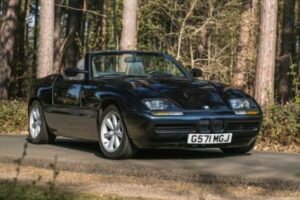 BMW fans in the U.S. may often think of the Z3 as the company’s first mass-market roadster positioned below the 3-Series in the modern era, spanning the last 30 years. But just a few short years before the Z3 debuted in an era of pocket-sized roadsters from Germany, including the Porsche Boxster and the Mercedes SLK-Class, a very different and very small BMW was available to buyers in Europe and a few other regions.

That roadster was the Z1, and in addition to a new aesthetic it had a few other tricks up its sleeve, including drop-down doors and plastic body panels designed to be swapped out by the owner to change colors.

Z1 values have surged in the past few years, as enough time has passed for them to be considered classics, coupled with their eligibility for importation into the U.S. So they’re not the oddball bargains they once were.

In a few weeks a 1989 Z1 with 69,366 miles on the odometer will go up for auction in the U.K., when Classic Car Auctions offers it as part of its London Classic Car Show sale. 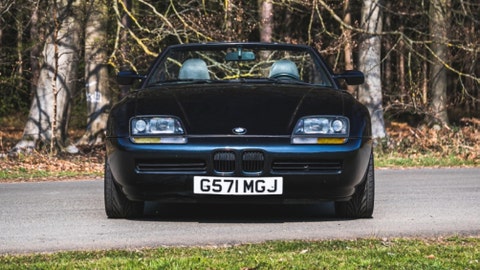 The Z1 fully earned the Zukunft name at its debut just over three decades ago, featuring a substructure made of hot-dipped galvanized pressed steel wearing plastic body panels on its exterior. This approach, along with zinc welded substructure seams, resulted in a very stiff structure devoid of scuttle shake, while the skin was made from a Xenoy injection-cast thermoplastic that General Electric developed. To top it all off, the doors lowered and raised themselves with the push of a button, riding on toothed belts, allowing the car to be driven with the doors open. The thermoplastic body panels were also designed to be removable easily enough for owners to do this themselves, usually over the course of a couple days as practice showed, in order to change their cars’ color on occasion. (This was obviously before inexpensive vinyl wraps came into vogue).

While the wedge-like exterior, drop down doors and plastic body panels were certainly futuristic, what sat underneath was a little more familiar and a little more serviceable to shops that might have never dealt with a Z1 before. BMW borrowed the M20B25 2.5-liter inline-six from the E30 lineup, namely the 325i, giving the Z1 plenty of power since it also happened to weigh a lot less than the larger, metal-skinned 3-Series.

But the Z1 was also produced for a much shorter period of time, from 1989 through 1991, so it was never really a mass-market offering aimed at the inexpensive roadsters of the day. 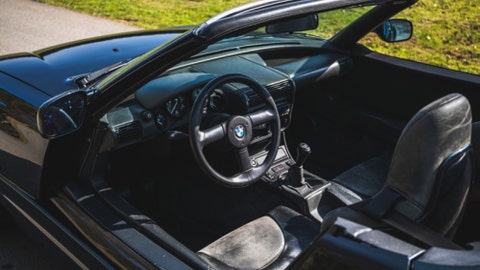 The car that Classic Car Auctions will offer is an example finished in Dream Black metallic over a dark grey nubuck interior, and is a left-hand drive originally supplied to the U.K., as BMW did not make right-hand drive examples. Among other things, this means the odometer display is in miles, making it an U.S. export friendly car, with the odometer reported to show be 69,366 miles. This car received a full cambelt service in March, 2020, and also a new folding roof the same year. The auction house reports that this manual transmission Z1 shows a full BMW dealer service history with 19 stamps in the service book. As a bonus, there is also some celebrity ownership history: this Z1’s first owner was Chris Lowe of the Pet Shop Boys. 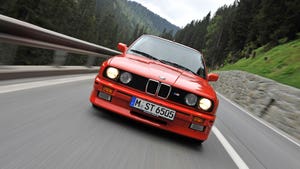 Z1 values have certainly risen a bit since the car became eligible for U.S. importation within the last five years, but they’ve also just risen in general. A decade ago this model was considered a curiosity and a bit of a toy car, collected in BMW circles but never taken especially seriously, given other models deemed far more collectible. It was also a model with a fan base of owners that were not necessarily BMW collectors, but liked the car’s cheerful looks, versatility and rarity. So diehard BMW collectors were not really after the Z1, and if they owned one it was just for the purpose of checking a box. 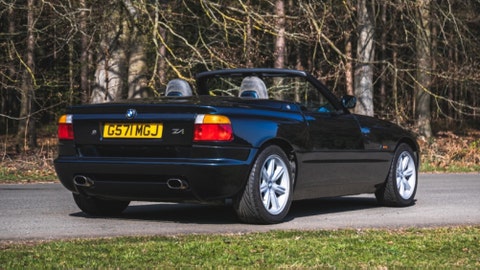 That’s beginning to change now that the best examples are settling into collector ownership. Just days ago a Top Red example with 52,000 miles on the clock, also a left-hand drive U.K. car, sold for £28,688 at Silverstone Auctions in the U.K., or $40,500. This is where these trade now with this mileage range, though there are really few examples that have done more than 100,000 miles, being fair-weather runabouts.

These have been making their way stateside for a few years now, and at this point we’ve seen about half a dozen on both coasts. So stateside BMW fans are definitely taking notice of this model.

This particular example should land in about the same range, unless there are multiple Pet Shop Boys fans in the auction room wanting to fight over it. The exterior color could be said to be a bit muted, as Z1s tend to look better in lighter colors, but then again one could swap out the plastic panels in a couple of afternoons.