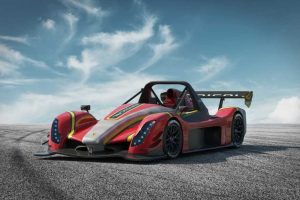 Easy to operate and cost-effective, the all-new Radical SR10 aims to keep drivers on the track for longer stretches at faster speeds, whether dicing it up at the local club track day or racing in the Radical Cup. Expanding on the architecture of the Radical Motorsports SR model line, which includes the SR3 and SR8, the SR10 offers the next level of Radical performance, incorporating some aspects of the marque’s larger RXC range of cars.

Also new is a Hewland GT3-based six-speed gearbox mated to a Hewland TMT transaxle. The SR10 is the first Radical to use the TMT transaxle, which was first developed for the 2009 FIA F2 race car. Built on a lightweight spaceframe chassis to FIA specifications, the SR10’s priorities are centered around durability and maximum performance. A fully adjustable Nik-link suspension system, interchangeable anti-roll bars, Intrax triple-adjustable dampers with anti-roll control technology, and forged center-locking hubs provide chassis control. A paddle-activated gearshift system with automatic throttle blipping and a torque-sensing limited-slip differential round out the performance kit. Radical estimates the engine’s rebuild interval at 80 hours of use, or more than 6,200 miles of race-pace action.

The two-seat open cockpit features an ergonomic dashboard (waterproof), an AiM Formula steering wheel, lightweight paddle shifters, a wheel-mounted LCD multi-page display with loads of real-time data (like on the SR3 XX), and a dash-mounted brake bias adjuster. In another first for the SR model line, the Radical SR10’s controls include adjustable steering assist for the optional electric power steering system, as well as engine and gearbox mapping options. Other optional features and upgrades include a set of carbon-composite high-downforce dive planes, a central-position single-seat layout, and an air jack system.