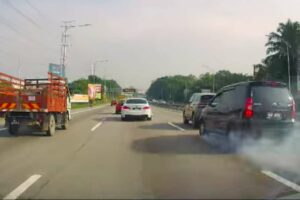 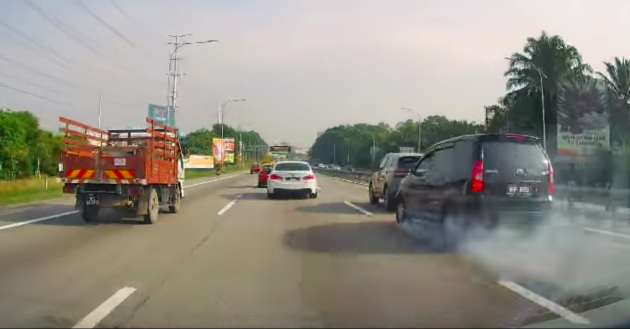 Yet another accident captured on a vehicle’s video recorder, or dashcam has been making the rounds on social media, and this time a round the incident involves a vehicle making a sudden lane change into the path of another vehicle approaching at much higher speed.

Here, the footage uploaded by Facebook user Ruhaiza Samsudin begins with a Proton X50 in the same middle lane directly ahead of the camera vehicle, which also shows other traffic on the right-hand-side lane travelling much more quickly.

One of those vehicles is the black Toyota Avanza shown in the screengrab image above, and its driver has failed to slow in time to avoid colliding with the X50 that has just pulled into its path, thus making contact and appearing to also make contact with a red Proton Waja taxi that has pulled over to the shoulder, behind the X50.

According to the stamp on the footage, the camera vehicle was shown to be travelling at 92 km/h before the X50 made the sudden lane change to the right, and before that, traffic on the overtaking lane can be seen to be travelling considerably quicker than that.

Looking more closely at the shadows of the vehicles ahead – that of said taxi, and the white BMW 5 Series between it and the X50, the preceding two vehicles were already their lane before the latter made its lane change.

When the Avanza enters the frame its front wheels are already locked as it trails plumes of tyre smoke, and inevitably collides with the X50 that has pulled into its path. As the X50 then gets pushed wayward, it appears to have collected the taxi as well, as indicated by both cars moving to the left shoulder.

While adhering to the posted speed limit should be a given, the responsibility of using the road safely also lies with the party making a manoeuvre to change lanes – or in any other instance of crossing the path of another road user – especially when a large speed differential is involved, which should already have been made clear to the driver of the X50 in this footage.

Even if speeding road users falls foul of the rules by exceeding the posted limit, and if the other party is at fault in other instances of failing to stop in time, the point is moot if the collision could be avoided, along with the attendant losses of time, use of property and money, as well as potential injury. Remember – look, indicate, and be sure the path is clear before making a move on roads and highways.