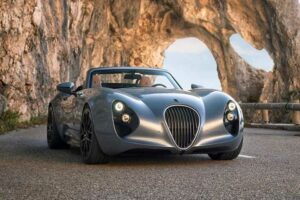 Wiesmann kept us guessing about its latest comeback sports car; the full details are a surprise…

The last time we talked about Project Thunderball, the scale of the reaction didn’t quite live up to the name. But that was just a preview – this is the real thing. And it’s fair to say that Wiesmann has swung for the fences. We were expecting a rear-drive convertible in the established mould (i.e. a brutish-looking thing with a BMW V8 in it). What we’ve got instead is an all-electric 680hp sports car – the first to hit the market since the Tesla Roadster.

It’s quite a statement. In fact, everything about the car is potentially eye-opening. First, there’s that colossal output, which is delivered solely to the back wheels via twin electric rear-mid mounted motors and a limited-slip diff. Wiesmann says it is targeting a 0-62mph time of 2.9 seconds, which would obviously place it among the fastest cars in the world. Fitting for a car capable of producing 811lb ft of torque in an instant.

The flow of electrons comes from a 92kWh (83kWh in practice) battery, backed by an 800-volt system architecture. That’s a robust combination to have successfully housed in a low-slung convertible, and means that Wiesmann can credibly claim to be seeking a range beyond 300 miles. It’ll also be capable of fast charging at up 300kW – so real-world usability ought not to be a problem. Or less of a problem.

Of course the size of the battery dictates a compromise in terms of kerbweight. Previous Wiesmann models, with their admirable preference for larger-capacity engines, have rarely troubled Lotus for low mass, but Project Thunderball eclipses any of its combustion-powered predecessors at a little over 1,700kg. Still, with carbon fibre the chief method of construction (the car is built in partnership with Roding Automobile, a specialist in the field) the manufacturer has likely done everything possible to keep its new sports car from feeling paunchy.

What they want it to feel like is ‘a true Wiesmann’. A tough ask perhaps with no BMW soundtrack to call upon, but the team has endeavoured to make up for the difference where possible. Steering wheel-mounted paddles allow instant adjustment of the car’s unique Wiesmann Intelligent Regenerative Braking System, where five settings are said to help a driver to mimic ‘a powerful engine braking effect into corners’. We’re going to go out on a limb and say this probably isn’t as invigorating as downshifting in a V8 convertible – but it’s nice to know they’re devoting time and energy to the issue.

Considerable effort has clearly been lavished on the cabin, too, where you not only get fine leather and hand-made wood veneers, but also the old-school spectacle of seven (count ’em) worry dials. Flanked, of course, by a large touchscreen that tells you useful things, like how fast the car is charging specifically to the kilometre, rather than to the percentage of total charge – so you can get back to driving the second you have enough for your journey. When you might be able to make said journey isn’t clear; Wiesmann is currently accepting enquiries on its website, but not actual orders. It merely confirms that every car will be ‘hand-crafted in our state-of-the-art factory in Dülmen, Westphalia’. Regardless, you can expect Project Thunderball to be neither cheap nor widely available. So get your name down now if it’s struck a chord.

All-new BMW i7 unveiled with up to 660hp