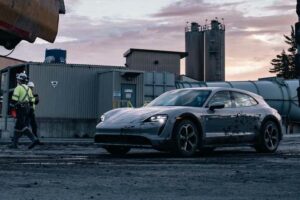 The Porsche Taycan Cross Turismo is meant to be the EV that can get you mostly anywhere. There’s a bunch of ways to test that, obviously, but one of the biggest challenges for a battery-powered car is serious elevation change. This was the task a Taycan had recently been put to in ascending 15,889 feet from deep in a mine to the top of the legendary Pikes Peak.

Getting three entire miles of elevation without resorting to air travel is tricky, so a team led by documentary maker J.F. Musial had to start by negotiating themselves a low point. The hardest issue was that as well as being, y’know, super deep in the ground, it had to be somewhere that the Taycan could drive into and, more crucially, out of to start its journey. Every foot of elevation, for the record, had to be achieved under the car’s own rolling power, so using elevators would’ve been totally out of the question.

Fortunately, there’s a mine in Michigan you can drive into and with the Taycan Cross Turismo being both electric (so fumes-free) and equipped with enough off-roading power to count as a utility vehicle, it was allowed in. Eagle Mine has a tunnel that goes 1,774.4 feet below sea level before you can’t take a car any further and under strict supervision, that’s where the Taycan started its journey. Once you’ve worked out a low enough starting point, the rest is—relatively—easy. On a map, at least. To get all the way to Pikes Peak from Eagle Mine meant driving 1,413 miles, and they had only two pauses to charge the battery. That’s impressive on mileage if the Taycan had been coasting on flat roads but one of the problems with steadily climbing, in an EV, is that you’ve got all the torque but none of the opportunity for sweet, delicious regenerative braking to put range back into your car.

The whole feat took 33 hours, 48 minutes and by the end, the team was worried about snow closing in at the mountaintop. Oxygen levels fell by 40 percent from the bottom of the mine to the top of Pikes Peak and relatively extreme weather toward the summit looked set to jeopardize it. However, 2020 Pikes Peak International Hill Climb class winner Dai Yoshihara knows the route well enough that he brought the Taycan home and took the record for the whole team. J.F. Musial, who started the trip driving and remained onboard the Taycan for the whole journey as a passenger, said, “You can plan for months, develop a highly detailed schedule, but at the end of the day it always comes down to execution and weather.”

“I couldn’t have been prouder of our team’s efforts. The weather—that was a different story. I’ve always been told that the mountain decides if it’ll allow you to get to the summit,” Musial continued. “Despite an incoming snowstorm, we got lucky and found a small 45-minute window to get to the top—the mountain let us get this record.”