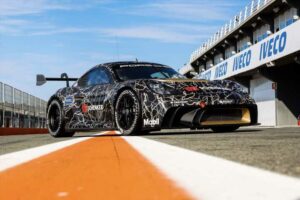 Want to know what a zero-emission Cayman will look like? Porsche drops its first hint with 1000hp racing test bed

We’ve already written about the Porsche Misson R concept, which is the firm’s vision for an all-electric customer motorsports vehicle using “state-of-the-art technologies and sustainable materials… with a passion for racing.” Well, the concept has become part-reality in the form of the Porsche Cayman GT4 ePerformance. This mobile test bed is being used to evaluate the concept car’s potential for national and international GT racing.

The GT4 ePerformance is underpinned by a development of the 718 Cayman GT4 Clubsport’s chassis. It ditches flat-six petrol power for an all-wheel-drive electric powertrain ‘consisting of a permanently excited synchronous machine’ or (PESM) – as always, Porsche is never one to shy away from acronyms. The PESM, delivers a total peak power output of – wait for it – 1,088hp. Even with all-wheel drive, that ought to give the drivers something to think about on a wet weekend. That power output is for qualifying spec, though. For a race it will be reduced to 612hp (Pah! A mere 612hp) that will be available for 30 minutes – the duration of a Carrera Cup race. According to Porsche, the top speed (around 186mph) and lap times of the GT4 ePerformance will be similar to a 992 GT3 Cup car.

To keep the car’s race performance consistent, Porsche has developed its own oil cooling for the motors and battery pack. According to Björn Förster, the GT4 ePerformance project manager, this “has significantly impacted the vehicle concept.” He added “With experts in the fields of aerodynamics and thermodynamics as well as high-voltage and bodywork specialists, the development team created an architecture to tap the full potential of the battery cells for the first time, since there is no thermal derating. In this way, the power output in racing mode remains constant for half an hour.” The charging system runs at 900 volts, so the GT4 ePerformance can be boosted from 5 to 80 per cent in around 15 minutes.

As we said, the chassis concept is based on a 718 Cayman GT4 Clubsport but it is 14cm wider thanks to its exaggerated arches, which are there to accommodate wider 18-inch Michelin racing rubber. The car also contains in the region of 6,000 unique parts and more sustainable materials – the bodywork, for example, includes natural fibre composites that generate fewer emissions during production than the equivalent synthetic composites.

The GT4 ePerformance will have its first public outing at the Goodwood Festival of Speed this year (that runs from June 23 to 26 in case you fancy booking tickets). Its next demo will be at the Porsche factory in Leipzig and then it’ll embark on a world tour. In line with the ‘race2zero’ project it won’t be flown anywhere – its destinations, which will include North America and Asia, will be reached by ship, train and truck.

Oliver Schwab, Project Manager Sales, says, “The 718 Cayman GT4 ePerformance blazes a trail to Porsche customer racing with electrically-powered racing cars. As a first step, we will unveil this concept to our global partners. With drivers, teams, organisers, authorities and other interested parties, we’re also gathering ideas for Porsche racing formats in the future.”