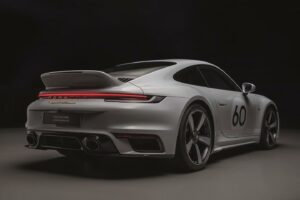 Rear-drive, manual special edition 992 might be just the 911 Turbo S we've been waiting for…

Think back to 2009. No, no, not the creation of Bitcoin; I mean the Porsche 911 Sport Classic. It was Porsche’s first stab at retro-chic, and, with a production run limited to just 250 units, those with the money and a helpful contact at a friendly dealer became the lucky few: all 250 were snapped up, pronto. Yet when we get down to brass tacks, it was, essentially, a humble 997 Carrera S. Okay, it had a few frilly bits – special grey paint, a small power hike to 408hp, some pretty Fuchs-style wheels and a ducktail spoiler, that sort of thing – but essentially it was fairly ordinary underneath. And for that Porsche charged a whopping £140,000 – way more than the equivalent 997 Turbo. So how about this for a follow up: a Sport Classic based on the 992 Turbo S. Oh, and it’s a manual. And it’s rear-wheel drive. Has that piqued your interest? Thought so.

Porsche Exclusive Manufaktur unveiled the 2022 Sport Classic today, which, as you can probably tell, is sticking with the era of the swinging sixties and early seventies as its theme. The grey hue has returned, inspired by the Fashion Grey shade of early Porsche 356s, but here with a metallic fleck. (Apparently, being a solid colour last time out, there were comments like “oh cool car, but when are you going to paint it?”) Indeed, the colour is called Sport Grey Metallic, although if you’re not a fan of grey then, to paraphrase Henry Ford, the Sport Classic is available in any colour, as long as it’s solid black, slate grey (Agate Grey) or blue (Gentian Blue).

The ducktail and Fuchs-style centre-locking wheels are also back – both clichés, yes, but come on, they look superb – along with handsome, hand-painted stripes running from bumper to bumper set beneath the lacquer. The roundels on the doors are stickers, though. This allows you can change the number to whatever you wish to symbolise, as long as that symbol is a number between 0 and 99. Or you can peel them off if you want. Topping off the retro look outside is gold lettering and a set of classic Porsche crests for the bonnet and wheels – featuring the design as it was in 1963.

The beady-eyed among you will have also notice some more fundamental changes over the standard Turbo S. These, Porsche says, are the most sizeable alterations to a Heritage Model yet, and required a lot of expensive retooling. For example, there’s the double-bubble carbon-fibre roof. And because the width of the depression in a standard Turbo S’s bonnet didn’t match that the width of the recess in the middle of the new roof, they created a new carbon-fibre bonnet, with a narrower dip to match.

Next, have a look at the rear wings. You’ll notice the cooling vents have gone. This detail, apparently, was the subject of some debate. They could’ve left them, but decided this would detract from the clean, classic style, so they created completely new, bespoke rear wings – metalwork that stretches from the A-pillars to the back of the car. How does the removal of the ducts affect the car’s cooling? The answer is that the vents in the 992 Turbo S don’t make much of a difference. These days they’re more for styling than anything, because the amount of air that goes through them has decreased massively compared with the 991 and 997 Turbos. The 992 Turbo takes most of its air through the rear, which is what the Sport Classic does – via the intake above the ducktail. The Sport Classic also dispenses with the moveable front and rear spoilers that are the standard Turbo S.

We’ve already mentioned perhaps the most appetising elements – rear-wheel drive and a seven-speed manual gearbox – changes that also added significant development time. Indeed, when you think that a typical series production Porsche takes about four years to ripen, the Sport Classic’s lead time wasn’t far behind that. It retains the PASM, PDCC and rear-axle steering, but all these systems needed recalibrating, as did the stability management, of course. And with the removal of the front drive shafts, central prop shaft and the PDK gearbox, plus the lighter carbon bits, there’s been a reduction in weight. It’s not massive after spec adjustments, but to stick numbers on it, the Sport Classic is 70kg lighter than the Turbo S at 1,570kg (DIN).

Among the full hot and cold climate testing and road routes, the Sport Classic has been lapping the Nordschleife. Mind you, it’s being stressed this isn’t a motorsport car. It’s not a lightweight GT model. Far from it. It’s described as an analogue car for high days and holidays; more Côte d’Azur than Copse Corner, if you like. So there were no qualms about detuning the 3.7-litre twin-turbo flat-six by 100hp – although, at 550hp it’s still the most powerful manual 911, trumping the GT3’s 510hp, and there’s a thumping 443lb ft of torque as well.

The car’s ‘relaxed’ air is reflected in the Sport Classic’s interior. Instead of the Weissach mob levering off everything that isn’t structural, this car is a smorgasbord of pleasing trims and surfaces. They all hint at the past, of course. There’s two-tone black and cognac semi-aniline leather, which is complimented by pepita houndstooth cloth on the door panels and seat centres – an official option on the 911 back in 1965. The instruments have classic green digits, referencing the 356, and there’s a perforated Alcantara headlining. The gold, limited-edition badge above the glovebox, stating the car’s build number, finishes things off.

If you invested in Bitcoin back in 2009 you should easily be able to cover the £209,540 purchase price. If not, you can catch a glimpse of the Sport Classic at this year’s Goodwood Festival of Speed. Production starts in June, and European deliveries (UK cars will come in right-hand drive) will begin in July. And if you’re too late for this one, it isn’t the end of the story. The Sport Classic is actually the second of a four-pillar Heritage Design strategy.

The pillars span eras rather than exact decades, and the first was the 991 Targa Heritage Edition, which reflected the 50s and 60s. This Sport Classic, as we know, progresses that through to the late 60s and early 1970s, and it’ll be followed by two more models celebrating the late 70s and the 80s. All these will be road-biased cars, but there’s even been talk of something else more motorsporty involving the Weissach crowbars. We’ll let you know more about that when it’s confirmed.