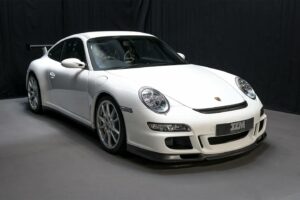 The GT3 RS is the best race car for the road out there, so why not have it look like one?

Back in 2003, Porsche introduced the first 911 GT3 RS, evoking the spirit of the 2.7 RS. Spec options were conspicuous by their absence – there were no Paint To Sample air vent surrounds or Satin Aurum wheels to pick from then. Buyers got white whether they wanted it or not, and had the choice between red or blue graphics – that was it.

The 2.7-style graphics made it to the 997 GT3 RS as well, albeit now with a slightly wider array of colours available: there was green with black, orange with black and black with orange. That seemed to be it, with the odd exception, those jazzier colour combos coming later in the 911’s life. Now we have colours like Shark Blue exclusive to the GT3, because why not? If there’s money to be made in options (and there is – piles of it) go ahead and make it.

This 997 GT3 RS is particularly interesting, as it isn’t black, orange or green. It’s plain old Carrara White, typically a no-cost option and never before seen – at least not to us – on the 997. Looks great, doesn’t it? Much more subdued than the orange or the green (or black with wheels the colour of juvie jumpsuits), yet arguably more in keeping with the GT3 RS ethos. Racing cars are often white before sponsors’ decals are applied, the GT3 RS is as close as it’s possible to get to a Porsche race car for the road – so it all makes sense, right?

Fortunately for the next buyer, the first (and only) owner hasn’t treated this GT3 RS like a racer. Apparently the car “was the realisation of a childhood dream” for them, and collected in person from Stuttgart; from then it’s only covered 10,000 miles in 14 years. So the front end is free from chips, the harnesses look barely used and the steering wheel, if slightly worn, doesn’t look to have suffered from being sweat-soaked on dozens of track days. It looks pristine, in fact, which always seems a bit odd to say about a car so explicitly designed to be driven hard. Still, pay your money, take your choice – even just 10,000 miles in a 997 GT3 RS will surely have been a joy.

But what an experience this promises to be. Perhaps not quite to the later 3.8 and 4.0 RS levels, though even at £140k this is a lot less money. And as the higher mileage cars have proven, miles could be accrued (and enjoyed) in this without significant impact on the value. All in a GT3 RS rarer than the rest of them – doesn’t sound a bad way to spend the money to us.