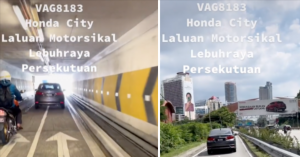 Police are tracking down the driver of a Honda City that has been caught on camera driving on the motorcycle lane of the Federal Highway. The video by call_mezul in Tiktok went viral and that alerted the cops.

PJ folks will recognise the scenes easily. From these screenshots, you can see the grey previous-generation Honda City entering the tunnel below the Jalan Gasing interchange where the EPF building is, rolling towards Amcorp Mall. The City also passes under the giant billboard of… the new Honda City.

The video owner identified the sedan’s number plate as VAG 8183. Looking at the speed and manner of driving, which is slow (a glimpse of the bike’s speedo shows the needle below 60 km/h) and tentative, it could be possible that an elderly or blur (or both) driver accidentally turned into the bike lane and was forced to continue on it. We’ll see what he/she tells the cops.

“A police report has been made to allow for investigations to be done under Section 42(1) of the Road Transport Act 1987. However, there have been no accidents or injury to other road users,” PJ district police chief Mohamad Fakhrudin Abdul Hamid said, while calling for the owner or driver of the car, or other witnesses, to step forward and assist investigations.

To do so, just head to the nearest police station or contact the investigation officer directly. He is Sarjan Ahmad Termizi Abdul Halim and his number is 013-3752511.