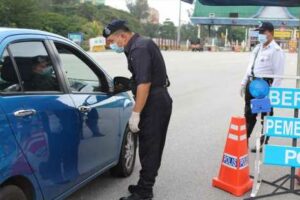 PLUS has announced an extension of the temporary closure of the entry lanes at the Jelapang Utara toll plaza in Ipoh. The closure, which started in May during the MCO 3.0 period under police orders, was supposed to have ended on the midnight of June 28. It will now go on for an indefinite period.

This closure affects those who want to enter the North South Highway to head north towards Penang. PLUS has suggested two alternative routes to enter the highway, depending on where in the Meru area you’re coming from.

One is via Persimpangan Meru (a big loop that passes Bandar Meru Raya and the Muslim cemetery) and the other is the junction near Carsem, which will be nearer if you’re coming from Jelapang. Both will lead to the same interchange with the North South Highway.

Malaysians have not been able to cross state and district borders since May 10, two days before MCO 3.0 started. That was upgraded to the full lockdown FMCO on June 1, where the 10 km radius travel limit was reinstated. Long distance spouse travel, previously allowed, is no longer a leeway in FMCO.

As for when we’ll be allowed to cross borders again, it won’t be anytime soon. We’re now in phase one of the National Recovery Plan (or Pelan Pemulihan Negara, PPN), and while inter-district travel will be allowed in phase three, interstate travel will still be banned. The green light is in phase four, which lists milestones such as below 500 daily cases and over 60% of the country vaccinated. Estimated October 2021.