Pleasant service experience with Wheels Wisdom for my Maruti S-Cross 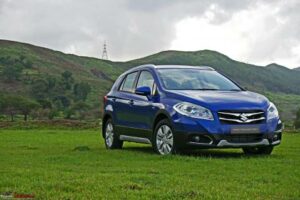 Wheels Wisdom claims that in its intermediary capacity, it will ensure that the service station does not carry out unnecessary work or overbill.

BHPian naadopaasaka recently shared this with other enthusiasts.

I drive a pre-facelift Maruti S-Cross Sigma 2017 with the 1.3L DDIS engine.

There were some minor complaints I had with the car. The car had also reached 40,000 kilometres and was turning 5 years old. My service experience with Nexa had been okay. It is certainly much better than some of the “horror stories” on this forum from some brands, but it isn’t nearly as good as it can be. I wanted the complaints resolved and also some sort of certificate (even if informal) that the car was good to do another 2-3 years and 15,000-20,000 km.

My grievances with Nexa are primarily two.

First, there is a laid back/ lax attitude combined with a general lack of application of mind and interest. Complaints are often not diagnosed or resolved properly. Everything requires following up and sometimes multiple visits. Promised time-lines are almost never kept. To illustrate, I had complained about the parking brake not having quite the grip it used to. They said they’d tightened the cable. One week later, it was back to where it was before they’d worked on it. On multiple occasions, I have spent half a day at the service station for work they confidently said would only take an hour or two to complete.

Second, there is some incompetence. An instance of their incompetence: They changed one glow plug but not all four together. The technician in his greasy overalls but with the wisdom and experience of having worked on thousands of cars told the manager that all four should be changed if one conks out. The manager, in front of me, vetoed him and said, “let’s do one for now and see.” In due course, a month later, the second failed, and on this occasion an SA from the same service station seemed very surprised that only one had been changed on the previous occasion. The part costs some ₹300 per piece. What prevented them from changing all four? My lack of knowledge also cost me the time and inconvenience of an extra visit. I suppose I also did end up paying extra by way of labour charges for two assignments instead of one. I now wonder whether it was just incompetence or whether the labour charges were a part of the calculation from ball one.

I had gotten tired of following up with Nexa. I therefore decided to approach Wheels Wisdom.

I thus signed up for a silver membership with Wheels Wisdom. The membership cost me ₹4,720 (all inclusive). I then booked a 6-monthly general check-up, which cost me ₹4,130 (inclusive of taxes). This would include, as per WW’s website/ policies, top-ups of fluids like coolant up to certain quantity limits (100 ml) and labour charges. They would not include parts and abnormal work. The coverage is set out in detail on their website at this link.

Anyway, here’s what I learnt about WW from the S-Cross’ 6-monthly check-up:

You don’t deal with the service station directly. The WW representative is the only person you talk to. Your immediate point of contact is a person designated as a “technical advisor.” I dealt with one Shri Sasiharan who was unfailingly kind, courteous, perceptive and knowledgeable. He also loves both cars and his job, which really adds value! He came home (exactly on time) to pick up the car, kept in touch with me throughout the process, took approvals where required, dropped the car back home, and joined me on a test drive thereafter.

Wheels Wisdom claims that in its intermediary capacity, it will ensure that the service station does not carry out unnecessary work or overbill. I don’t know whether this affected my own experience.

Problem-solving. When you make a booking, you are permitted to list complaints, if any, that you have with the car. I listed the following:

After I made the booking online, I got a call the next day from Shri Madhusudhan, who is a manager of some sort, one level above the technical advisor. He too was kind, courteous, knowledgeable and understanding. He had read my complaints, thanked me for the details and told me that none of these complaints require any further discussion between us and that the tech advisor would look at it when he picks up the vehicle.

Once the car was picked up, I was constantly brought up to date on email and WhatsApp. My own number does not have WhatsApp so I had, for WhatsApp alone, requested WW to use another number. Without fail, all calls would be to my number, but all WhatsApp messages to the other number. They actually pay attention.

The biggest positive in my experience is that the tech advisor ensures that the problem is diagnosed correctly. With the ASS directly, diagnosis is by a trial-and-error approach, often not yielding results, and you often end up paying for parts and service you didn’t need.

The tech advisor addressed the complaints listed above as follows. Against each item below, I also give in flower brackets details of what WW had said to me in their estimate by which they sought my approval before carrying out the work, and my response thereto:

I also understand that WW can get slots for service at authorised service stations more easily than you and I can. But I have no personal experience of this.

They are very easy to contact and deal with. Every email from them has their escalation chain mentioned. After the service, they send you an email checking if everything is okay. In my case, following the replacement of the front brake pads, there was some squeaking/ squealing. When I mentioned that in response to their post facto email, I got a call the next morning and the manager explained to me that it was normal and would take 200-300 kms to go. He said that I should contact him if the noise continues after 500 km.

I understand that in the event of part changes, WW is able to procure parts at cheaper prices. However, I have no personal experience of this.

My fifty-paise opinion: If you own a Maruti/ Tata/ Mahindra, I am not sure that the cost will work out to be cheaper than if you approach the ASS directly. I would like to be proven wrong on this. But I am absolutely willing to buy peace of mind and reassurance for the increment. Incompetence and dishonesty is an illness that seems to affect the whole of this sector. If you own a VW/ Skoda/ Jeep or something of that ilk, you will likely save a lot of money. But all this is speculation.

If I was to be picky, I would say that the sheer number of WhatsApp messages and emails can be overwhelming. But I am not bothered by that. I understand why they do it.

I suppose the question is whether you’re willing to pay the ask for these services. I am.

Here’s what BHPian Sidban85 had to say on the matter:

I used Wheels Wisdom last 2 years when I had my Skoda Rapid. Their service was always 5 stars. Very courteous and patient and technically competent. They used Raja Skoda for fuel injector issues and FNGs for suspension and similar issues.

Only issue was that sometimes the open slots were almost 1 week away, so if you need urgent support, it may be an issue.

But I would still recommend them as the pick and drop and rest of service was great.

Here’s what BHPian Zen Av8r had to say on the matter:

I have been using Wheels Wisdom since 2017 to get my VW Polo and Honda Jazz serviced. The Polo is serviced at an FNG while the Jazz is taken to the Authorised Service Center. I am delighted and satisfied with the way WW handles the process. I have also found everyone from the WW Team that I have interacted with to be very positive and helpful.

Here’s what BHPian paradhak had to say on the matter:

Couple of years back, I had met with a minor accident when a truck grazed the RH mirror of my Honda City in a slow moving traffic jam. The casing of the assembly broke and came off. However the indicator and the electric folding functionality were intact. Took the car myself to the Honda ASS, they quoted 7k+, saying that the entire assembly had to be changed. As per them it came as an entire set and the casing alone could not be changed. Reached out to WW. They took the car to a different Honda ASS and managed to get a new casing. Including their charges, got it fixed for 4k.

I found them to be very polite and professional teams. Strongly recommend.