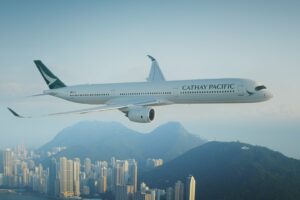 To take advantage of seasonal tailwinds—and as an added bonus, avoid Russian airspace—Cathay Pacific has modified a nonstop flight route from New York JFK International Airport to Hong Kong International Airport to fly Eastward, around most of the globe. If it departs as planned, it will take the crown for the longest commercial flight currently available at a staggering 10,357 miles, according to CNN.

The previous route the flight took was roughly 2,300 miles shorter and traversed Russian airspace, taking a route that flew close to the North Pole. The new journey instead flies out across the Atlantic Ocean and continues eastward over Europe and Central Asia before landing in Hong Kong. The entire flight will take around 16 or 17 hours to complete depending on tailwind speed, and will be flown with an Airbus A350-1000 that can seat up to 334.

In an interview with CNN, a Cathay Pacific representative declined to name the Russian invasion as the reason for the flight path proposal, instead putting the credit on the tailwinds for the journey. China and Russia still have maintained relations despite the Russian invasion of Ukraine, and as the flag carrier of Hong Kong, Cathay Pacific could still fly above Russia without breaking Russian airspace restrictions, which primarily apply to Western airlines. The new flight does avoid Russian airspace in its entirety, though.

While the distance is record-breaking, even a worst-case scenario of 17 hours in the air means it still won’t be the longest flight in hours available to travelers—instead, that crown still goes to a 17 hour, 50 minute trip from Singapore to New York operated by Singapore Airlines that covers 9,540 miles. It’s also unclear how long Cathay Pacific could offer the flight along this path as the current route is aimed at taking advantage of strong Atlantic tailwinds that are unlikely to last long-term, meaning it may be cheaper to fly across solely the Pacific in coming weeks. All of this means that Singapore Airlines may regain its longest-flight crown for miles soon.

The recent path modification comes on the heels of Hong Kong’s government easing COVID restrictions on international travel to and from certain countries, one of which is the US. The new rules take effect tomorrow, and the first flight with the long-haul route will depart on April 3. If you want some strange bragging rights or just love the idea of getting on a widebody Airbus for 10,000 miles, though, you’ll need to be a Hong Kong resident to board, as Hong Kong’s COVID rules still bar foreigners from entering.

Got a tip or questions for the author? Contact her directly: [email protected]