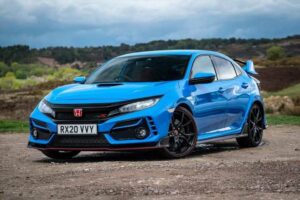 Don't want to pay a premium for that showroom smell? Here are the barely used hot hatches you should buy

It would be premature to start mourning the passing of the FK8-generation Type R with anything like real misery as Honda has been forthright about replacing it with a car that will share many of its more enlivening features – and in a decade where dullard plug-in hybrids are already being passed off as genuine hot hatches, we can all be glad about that. Nevertheless, the outgoing Civic left so deep an impression on all who drove it that it would be cruel and unusual not to include it on any nearly new shortlist.

Of course, it was the model’s cruel and usual appearance that put many off in the first place, but that notable demerit must be weighed against the Type R’s indisputable gifts. By the time it launched in 2017, we were well accustomed to the idea of the do-it-all hot hatchback – yet no previous car could claim to have to so masterfully covered all the bases. The FK8 rode with uncanny and distance-shrinking plushness, which somehow didn’t limit its ability for scything through the nearest apex like a tarmac rally car. Likewise, the K20C1 motor could dawdle with impeccable manners one minute – and then charge to a goosebump-spiking 7,000rpm the next.

It was also put together with typical precision, loaded with kit and supremely well-sized for the business of being a family car. Considering the level of game it brought with it, the Type R was also reasonably priced. Which is good news for anyone reselling one immediately; ongoing market turmoil and a lack of new stock means that low-mile 2021 examples are now beyond £40k. A year older ought to buy the ‘Minor Model Change’ facelift but keep the price semi-reasonable; this 2020 Type R is at Honda Nottingham, 6,000 miles old and priced at £38k. Sure, there are better looking alternatives to consider – but none physically better. NC

I’ll win no PH points for saying this, but the latest 300 Sport – with an automatic gearbox and the standard chassis – feels like the car the Megane IV Renault Sport always should have been. This latest one has never entirely convinced with a manual gearbox or a stiffer set up; with a dual-clutch and some French flow in the chassis, the latest Megane – if not exactly perfect – has become one of my favourites.

It looks sensationally good. Even in class not crammed with dullards and Sonic the Honda Hedgehog, the Megane would stand out. The interior is markedly improved on before, the engine still impresses and its ability to blend chassis comfort with composure – using just passive suspension – is trademark Renault Sport. The gearbox feels a bit old and an LSD would make it better still, but the latest model always felt much closer to what was trying to be achieved with a more mature Megane than ever before.

This one is the only facelifted 300 available on PH; always a rare car from launch, 2021 hasn’t exactly been the year to be selling left-field, £35k hatches. I’d urge you to try one ahead of a Golf GTI, but we all know what people actually buy. Presumably a dealer demonstrator, it’s for sale at £31,995 after 2,651 miles, which looks eminently reasonable given a new one is £32,995 before any options. And who knows how long a new one might take…MB

There’s been a lot of chit-chat recently about the latest Audi RS3. It’s a mighty fine hot hatch but so darn expensive, as many PHers have commented. Hot hatches that push through the £50k barrier are beyond the reach of many, and that’s brought into sharp focus when the majority of rivals sit in and around the £35k bracket. Then there’s the Mercedes-AMG A45 S, which is next level. A £58k list price…really?

Leaving the price aside for just a moment, though, what a thing. When I drove the A 45 back-to-back with the latest RS3 earlier this month I found it impossible to split them. Both are mega but built to diametrically different philosophies. When you add up all their relative skills, which is better comes down to what you’re searching for. If that’s more racer than tourer, I am pretty confident you’ll want the A45. It’s so focused that it feels stripped out even though it isn’t. The buzz of the road through the part-suede steering wheel, the punch of the gear shifts when you’re strapped into those brilliant buckets, and the rawness of the engine. It makes all the right noises in the zestier modes and if that doesn’t make you smile then the 421hp and 0-62mph in 3.9 seconds most certainly will.

That kind of performance does justify the price tag because it’s hard to come by for less. So the £45,990 being asked for this one seems all the more plausible, and it’s still covered by manufacturer’s warranty (after only 12,000 miles) and hardly half-cocked on the equipment front. Just look at the extensive list of trinkets you get – although what’s missing appeals to me, too. Without the rear wing it looks, dare I say it, discreet. Handsome even. That isn’t an adjective you’ll often hear used for the Type R. As much as I loved the Honda (and I really did, by the way) I could see myself paying the extra for this A 45 just for the palatability of its looks alone. JH