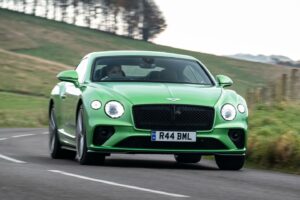 Planning a cross continental adventure in 2022? Here are the best GTs to do it in…

It’s hard to say this without sounding cruel, but I’ve never liked the Continental GT much. Even the V8 cars felt heavy, the styling didn’t appeal, and the rivals from Aston Martin and AMG tended to seem more charismatic. So guess what comes next. With all the predictability of an awful festive rom-com, I’ve become infatuated with the new GT Speed.

However, this isn’t a case of ignoring what’s been right in front of me for years, but rather a result of the significant overhaul the Continent has received in this time, with four-wheel steer and a new rear differential, plus completely revised driver assists and all-wheel drive. The latest 659hp Speed is nothing less than a revelation. That it replaces the regular W12 in the line-up is the least surprising development of a topsy-turvy year; the Speed is just as opulent, but an order of magnitude better to drive. Don’t look at any other grand tourer without considering the big Bentley; take it from someone who was never that keen – they’re fabulous.

As something so new, so complex and, frankly, so wonderful you wouldn’t sell it for many years, there aren’t many nearly new Speeds around. There’s just one, actually. It’s grey with black leather (fine), black wheels (boo) and some curious seat quilting but, for this Bentley, they don’t really matter. Paint it any colour you want, this will still be the best version of the best Bentley ever – and irresistible as a result. MB

It is possible that you might not be completely sold on the Ferrari Roma’s looks. It’s either a sublimely proportioned front-engined arrowhead of a thing – or else overly pointy for its own good. What you don’t need to worry about is the way it drives. Probably the Roma has no right to be as good as its tinkered-with Portofino underpinnings suggest, yet (not for the first time) Ferrari has both had its cake and eaten it: the super-GT is lighter, leaner, sharper and somehow even more supple than its stablemate.

Plus it has a revised 620hp 3.9-litre twin-turbo V8, with new cams to make it a bit punchier than the Portofino unit, alongside a new rear-mounted eight-speed DCT ‘box. Put it altogether and you get that rare thing: a sweet-handling, throttle-adjustable, great-sounding and wonderfully usable Ferrari. There is even room for kids in the back, assuming they are small and not inclined to moan.

Of course the Roma is also still very new, and that makes it a less than commonplace option in the classifieds – which, in turn, means you’ll pay handsomely for the pleasure of securing one. Here’s one in black from a franchise dealer with all the trimmings and a little over 6k on the clock for £209k – which is probably roughly what it cost new with options. A serious investment then, but this is a seriously good Ferrari, and they never come cheap. NC

There’s an unofficial motoring-hack ritual when it comes to describing a new Aston Martin. Somewhere in the review will almost always be written ‘It’s the best Aston ever,’ which translates as ‘not as good as its rivals.’ And sadly that’s often the case. But not with the Aston Martin DBS Superleggera. I have a particularly mushy soft spot for this car. The first time I drove one it was November, dark, cold and damp. The thought of dealing with 725hp in those circumstances, in a car that was bound to be underdeveloped, was not what I needed. But within a few miles I realised my pessimism was unfounded. After two hours (I’d intended to go straight home but couldn’t stop driving it) I was in love. In the end, I described it not as the best Aston ever, but the best front-engine, rear-wheel-drive GT I’d ever driven.

I stand by that. A Ferrari 812 Superfast would’ve been a right handful that night, but the DBS was a dream. I ended up turning off all the tractions aids and having enormous fun without any crashing at all. Not even a moment. What a manageable and well set-up car it proved to be. There were some iffy bits, like the sluggish gearbox, but even that couldn’t dent my enthusiasm. Astons are special, too. In a Ferrari, Porsche, even a Bentley, people tend to judge you negatively. In an Aston, people seek you out to tell you what a lovely car you’re driving. And for the first time, I could respond with “thanks, and it’s fantastic to drive, too.” That made me happy.

There are a few DBSs for sale at circa £200k, but I couldn’t help bringing this ‘On Her Majesty’s Secret Service’ edition to your attention. It is one of just 50 that were made to celebrate the fiftieth anniversary of the film, and we know what limited edition Astons tend to become – hugely expensive. So surely a limited edition of the what is genuinely the best Aston ever (we’re yet to try out the Valkyrie, of course) will be nigh-on priceless in years to come? Either way, priceless is how I’d describe my night in a DBS, so indulge yourself. You know what they say…you only live once. JH