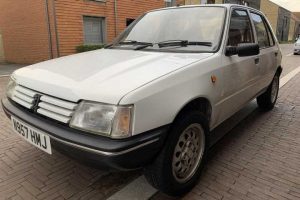 25 in March and seemingly still fit as a fiddle, this 205 needs just its third owner – who fancies it?

How long could you own a car for? If it's an old master like a 250 GTO, the answer would probably be 'forever', but what about more everyday metal? Would you get bored after the three-year period popularly quoted as appropriate these days?

Shed has been bored with his old bus for the last thirty years, but so far Mrs Shed has shown no signs of stepping aside for a more exciting new model. Today's Shed shouldn't really be around either. Peugeot 205s were never designed to last for 25 years, but this one looks like it's going to have no trouble blowing out the candles on its silver anniversary cake next March.

It's not a one-owner car, but it is the next best thing with only two. Noting its five-door bodywork and old-school automatic trans, you'd think that at least one of those two was 'mature'. The 37,000 miles since rolling off the line in 1996 have been ticked off at a metronomic rate of a thousand or so per annum. Three thousand miles have been done since the last MOT in August, when it was found to need a new indicator repeater bulb. If this isn't a probate disposal, maybe that was the outrage prompting the Pug's sale after an otherwise incident-free MOT history showing nothing more worrisome that the odd rusty brake pipe, blowy exhaust or wobbly ball joint.

What sort of driving experience can the next owner expect, though? Well, it is a 4-speed automatic, which when it's mated with an engine that doesn't produce its peak power until 6,400rpm is less than ideal. On the plus side, you do get peak torque of 94lb ft at 3,000rpm, which sounds like a better fit for an automatic. Remember too that Peugeot did actually do a 205 GTI auto, but even with less than 900kg to shift in this carbed 1.6 you'll soon be aware of how much things have moved on in the supermini class since the 1980s when the 205 first started racking up its best car of the year awards. Today you can expect a top whack of just over 100 per, a 0-60 time of about 14 seconds and average fuel consumption in the mid-30s. And most likely a big cloud of smoke when the motor is given what might well be its first ever bootful of throttle.

For long-term single-car owners, monetary value is often irrelevant. The car becomes part of the family. Keeping it becomes more about memories and loyalty. Or it may be of course that they're simply too stingy to buy a new one, but another possible reason for hanging on to a car for an inordinate amount of time is that it's never done anything to annoy you or cause you financial pain, so why get rid? That could easily be the case here. The next owner can find out for themselves by perusing the full service history.

Whatever the reason for sale may be, when a near factory-fresh car like this comes on to the market there's plenty of new fun to be had in witnessing the reactions of others desperate to regale you with their own 205 reminiscences until you remember that important appointment at the, er, library, or faint. There are no pics of the rear seats, but given the excellent state of the front of the cabin it's a reasonable assumption that the stretch of stitching that's come adrift on the passenger seat will be the only inside blemish.

1990s 205s resist rust pretty well, relatively speaking. No MOT tester has mentioned gloop on the underside, so we're assuming it's spent all its life in a garage. By the looks of it, it's rarely been out in the rain. The vendor tells us about a small brown spot on the tailgate. Other areas to keep a watch on are the door bottoms, sills, headlight surrounds and boot floor. Check the coolant for mayo, as head gaskets crumble. Suspension top mount bearings stiffen up and squeak. Seats wobble.

Other than that, the evidence of more 5.3 million cars sold should tell you something about the rightness of the 205. Shed reckons there are now fewer than a hundred 205 autos left in the UK, so for rarity value alone, £1,495 plus the cost of a bucket of Waxoyl doesn't seem that ridiculous.