Home » Auto News » Perodua Bezza goes against traffic on the SKVE after an accident, then hits another motorcycle – video – paultan.org

Perodua Bezza goes against traffic on the SKVE after an accident, then hits another motorcycle – video – paultan.org 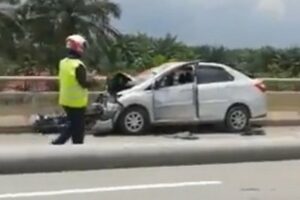 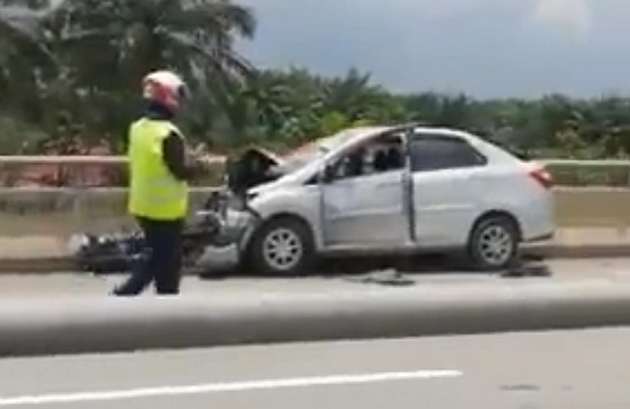 You would think these things would stop, driving against traffic, but here it is again – another case of a motorist going against the flow, with dire consequences. Videos taken yesterday afternoon and uploaded to a Twitter thread show a Perodua Bezza driving against traffic on the South Klang Valley Expressway (SKVE) after the Panglima Garang toll plaza heading towards Bandar Saujana Putra.

The video shows the car moving along at a fast clip on the extreme right lane, which is the emergency lane of in the highway’s proper orientation. The driver manages to cover quite a distance, but a subsequent video shows the car smashing into a motorcyclist on a Yamaha LC 135 coming the right way.

This puts an end to Bezza’s progress, but at a cost – the motorcyclist can be seen in another clip lying prone on the ground as bystanders berate the driver, who remained in the car. According to a statement issued by the Kuala Langat district police, the LC 135 rider suffered injuries to both hands and legs in the collision.

The Yamaha wasn’t the only bike the Bezza hit. Initially, the Bezza was first noticed by a motorcyclist on a Honda Dash, parked on the emergency lane near the RNR area at Tanjung 12 on the highway, but facing the wrong way. The Dash stopped, but the Bezza then accelerated, hitting the front end of the bike, causing the bike rider to sustain minor hand and foot injuries in the fall.

Thankfully, no one died as a result of this stupid behaviour. You’d think that after the first altercation, the Bezza driver would have stopped – was it panic that caused the subsequent drive down the road against traffic? Be alert, folks, and stay safe.