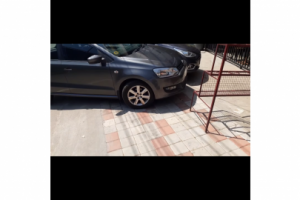 This is so common in Bangalore that no pedestrian would bat an eye if there’s a car blocking their way on a footpath, and one would submissively get on the road to continue their journey, exposing them to dangerous drivers from both sides on a one way road.

stealthcraft22 recently shared this with other BHPians.

Today I went out to run an errand in the neighborhood and while driving, noticed a very familiar sight – cars parked on the footpath. This place is just over 500 meters from the station. There’s a bank, salon, liquor store, café and a gym in this building and the parking space offered is barely enough for 3-4 cars, while there are several dozens of people visiting at any point of time.

This is so common in Bangalore that no pedestrian would bat an eye if there’s a car blocking their way on a footpath, and one would submissively get on the road to continue their journey, exposing them to dangerous drivers from both sides on a one way road. Apart from the lack of law enforcement, it is also due to the lack of common/civic sense of the vehicle owners and the apathy of everyone else that this menace is so rampant in this city.

So, I stopped a little ahead of this scene and decided I should do something about it. I called the HSR Traffic Police station and explained the problem to them. Perhaps in some other country, the police would have shown up within 2-5 minutes, given the distance from the spot. I still gave them a buffer of 20 minutes. However, the official who answered the phone asked me to note down the numbers and send it to him so that he can book a case against the offenders. BUT – that doesn’t solve the problem of several cars on the footpath. So I had to explain it to him. Thankfully he understood and said that a towing vehicle will be on its way shortly.

Well, long story short – I made several calls to the station as well as the in-charge of the towing vehicle, and only after threatening them with going to the L&O Police to file a complaint against them for not performing their duty, the towing vehicle showed up after a good 60 minutes. I was standing in the sun this whole time.

Once they started locking their wheels, some vehicle owners came out to plead with the police to let them go, but I ensured they locked wheels of all the offending vehicles. Police scooted off after locking the wheels, leaving the vehicles as they were.

Although they did penalize the vehicle owners in some way, the fact still remains that those vehicles were still ON the footpath when they were locked, and will now remain there longer than what they would have otherwise been. Now, as a law-enforcer, isn’t this something which they should take care of? Or am I asking too much?

Anyway, the lesson I learnt was to not give up, and have faith in the system. Persistence is key.

Thanks to stealthcraft22 once again! Check out BHPian comments for more insights & information.