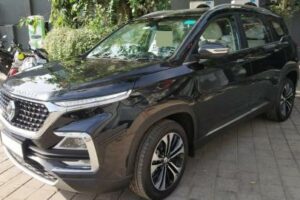 It replaced our 8-year-old Mahindra XUV500, an SUV that had set a good benchmark in the segment.

BHPian Tanmay_868 recently shared this with other enthusiasts.

I take this opportunity to share my personal experience with Hector (Petrol, MT) which we have owned for the past 1.5 years but with just 10k kms down as outstation trips have become a distant reality due to Covid (Though the amount of time I spent in the stationary car is much greater than the kms run as I got my license 2 months back).

Ownership update after 1.5 years and 10k kms down

We as a family have owned a fair number of cars starting from Maroon Maruti Omni now to Hector being the 15th car of my family.

It was the replacement for our 8 yr old XUV5OO which again was a great car and had set a good benchmark. But XUV had started to show its age thanks to very proficient Mahindra service centres. And in general, the itch to upgrade had taken its roots in our minds.

So we had the following requirements for the new car:

There were very few options for Big Petrol SUVs at that time.

So cars considered were:

We briefly considered this car due to the space it offered and that Toyota badge. But parents rejected it due to its taxi image and literally no features offered in it at such a high price tag.

Also a so-so experience at the Toyota dealership where no test drive was offered even after repeated requests further strengthen our decision.

Just thought to look at it but got rejected due to no justification for increasing our budget for the car.

Really knew from the start that this would be the car which we would end up with. Awesome fit and finish and the amazing Infinity music system were the most appalling reasons.

We got the car just 1 week after the booking from MG Delhi West (Kirti Nagar) as they had it in stock. We got the Burgundy Red colour. Considering now a minimum wait of 1-2 months, we are really happy with the whole experience. There was a cake cutting ceremony and they shot a video too.

Also, a very funny incident happened during the delivery.

So the BMW showroom is located just below the MG one in Kirti Nagar and they share the same parking compound. An X1 owner was waiting for his car to get serviced (near our car) as ours was being prepared for delivery. Soon our MG personnel came and started to demonstrate all the features of the car (music system too). The X1 guy too started to take interest in it and went through with the whole demonstration.

After the demonstration, there was a look of despair on his face and he said he regretted buying the X1 and went for a test drive of Hector Diesel MT.

Pros have been already been discussed in great detail on Team-BHP so I will move to key observations.