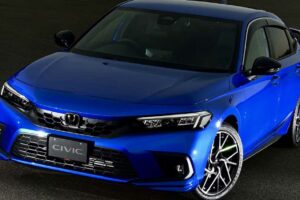 Almost 50 years after its introduction, Honda’s lovable Civic maintains its role as one of the brand’s most successful bloodlines, and also one of the industry’s all-time best sellers. Now in its 11th iteration, the recently unveiled 2022 Honda Civic Hatchback joins the currently available sedan—and brings with it an optional manual transmission, more tech than ever, and a mature aesthetic that has proven polarizing.

Honda Access Japan wasted no time in rolling out a handful of optional equipment pieces specifically for the Japanese domestic market (JDM) version of the five-door Civic to spice things up a bit. As with OEM optional pieces of the past, most should transfer over to the stateside version (though minor differences may cause fitment issues in some cases). If you’re not familiar with the Modulo label, Honda Access has been providing these OEM optional parts since 1996, usually designed for newly released vehicles, though last year the group debuted an S2000 facelift bumper option in celebration of the roadster’s 20th anniversary.

For the new Civic hatchback, Honda Access announced their Modulo MS-038 aluminum wheel, which carries a two-tone gunmetal and machined finish with flat center caps. The design effort takes cues from original factory wheels and blends them together, with a twist. It should be noted that this same wheel style was made available for the 10th-gen Civic and was carried over to the newer model. There are also piano black mirror caps that fit the upper portion of the side mirrors and retain an outline of the car’s original body color exposed.

The front bumper of the 11th-gen Civic, which brought the threat level down considerably compared to the outgoing model’s meaner mug, gets stepped, body-colored additions that sit under each foglamp, then swoop toward the main grill opening. Along the bottom of the bumper, the black plastic area features a color-coded piece to connect both ends and define a much sharper edge to the front fascia.

No optional package is truly complete without a wing to dress up the rear and to that end, the Honda Access designed addition attaches to the frame of the rear glass with black pedestals and a color-matched plane that folds over on both ends. The wing’s stopping point breaks even with the built-in deck extension that sits just above the taillights.

It’s not nearly as aggressive at the 10th-gen Type R’s controversial wing, and it does tend to tie into the sedan profile further, as the new addition casts a shadow over the area that you’d typically look toward in order to distinguish between a trunk or hatch lid.

Open the door of this Honda Access-equipped hatchback and illuminated “Civic” lettering is embedded in the door sill. To drive the point home even further, a spherical logo is also cast on the pavement once the door is open. Puddle lights are typically reserved for higher-end vehicles, but the engineering team decided to make it happen for Honda’s entry-level commuter. These optional pieces are expected to release this Fall in Japan and you can expect U.S. counterparts to emerge as well.

Regardless of whether these OEM optional pieces take off for Honda or not, we all know the new Civic will get more than its fair share of modifications from the enthusiast circle. With that said, we thought it might be interesting to get a glimpse of how a mildly modified 11-gen Civic hatchback would look with lowered suspension along with a set of aftermarket wheels and upgraded brakes.

We made the same changes to the 2022 Civic sedan a few months ago in order to see which version you prefer.

So, with a look at both body styles given the same treatment, which version could you see yourself in?