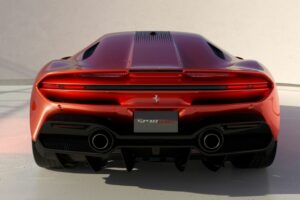 The bespoke Ferrari SP48 Unica has been created for a very lucky customer as part of Ferrari’s ‘Special Projects’ line of extremely exclusive cars. While for most of us any Ferrari qualifies as a dream car, these unique models let the mega-rich go several steps further.

Based on the F8 Tributo, the exterior styling of the SP48 Unica has been heavily altered for its mystery client, who was involved in almost every phase of the design process according to Ferrari. Most significantly, there’s no rear window, which gives the impression the car was sculpted from a single piece of metal. The F8 Tributo’s quad circular rear lights have been replaced with four slim LED light bars somewhat reminiscent of those adorning the Ferrari Roma.

One of the most drastic styling changes are the intakes, which have been brought lower than those found on the F8 Tributo and have a distinctive arrow-like shape. There’s also more extensive use of black trim, altering the supercar’s side profile and creating the illusion of a wrap-around ‘visor’ front windscreen.

The wheels are also unique to the SP48 Unica, with an aggressive slanted five-point design that resembles the shape of a ninja’s throwing star.

Official images of the interior have not yet been revealed, but it is reportedly largely based on that of the standard F8 Tributo, albeit with the addition of an ‘SP48 Unica’ badge on the passenger side and smatterings of laser-perforated Alcantara around the cabin.

The SP48 is powered by the same 3.9-litre twin-turbo V8 engine found in the ‘pedestrian’ F8 Tributo. In the F8 Tributo it produces 710bhp, 568lb ft of torque and is capable of propelling the supercar from 0-62mph in just 2.9 seconds and on to a top speed of 211mph. The jury’s out on whether the owner of the ultra-exclusive one-off SP48 will put that to the test or park the SP48 Unica in their living room as a piece of automotive sculpture.