‘One of One’ signals new Twisted Defender offering 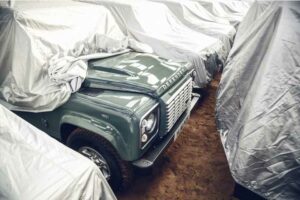 Back when the demise of the Defender was announced in 2015, snapping up one of the final cars looked a shrewd move, whether it was a last-of-the-line special edition or not. Especially with the pitch-perfect Heritage model available for £30k. The Defender had built itself such a formidable reputation that it was always, always going to be in demand. One man very certain of the fact was Twisted CEO Charles Fawcett, who you might recall bought 240 (!) of the final Defenders for £7.5m.

Entirely unsurprisingly, customer interest in Twisted’s factory fresh Defender builds has not dwindled over the years – so much so that not many are left. These latest ‘One of One’ 110 Defenders, of which there will be just 16, are notable for being registered in 2016 – after production had wound up. (Just in case they weren’t collectible enough already.) Every single one has fewer than 30 miles on it, having been dry stored since Twisted acquired its vast platoon of Defenders all those years ago.

Each of the 16 is going to be unique, too. Though all in XS spec (top of the range at the time), there are eight colours – including Keswick Green, Montalcino Red and Aintree Green – and two bodystyles, the five-seat Utility Wagon and seven-seat Station Wagon. There will be one version of each colour in each variant, for 16 in total. And, this being Twisted, is just the start of the Defender personalisation journey. Fawcett said: “The Twisted way isn’t to tell people what their Defender should be; it’s to work with them to create a Defender that’s the best fit for them.”

So, buyers can choose from either a 308hp/350lb ft 2.3-litre, four-cylinder petrol or 174hp, 310lb ft diesel, along with whatever choice of interior stitching and leather for the newly watertight cabin. All these One of One Defenders will benefit from Twisted’s usual raft of upgrades, too, including better springs, dampers and anti-roll bars, burlier brakes, LED lighting all round and Twisted 18-inch wheels on BF Goodrich all-terrain tyres. Standard kit inside includes Apple CarPlay and DAB, with the leather-lined luxury extending to the rear quarters as well. Dual layer soundproofing and an eight-channel audio system round out the familiar offering.

The One of One Defender is described by Twisted as both ‘a celebration of the launch of the 110 and a nod to the progression that was made by moving from the Series model.’ Which is why this car is pretty lavish even by Twisted standards, and why deliveries will begin in 2023 – 40 years after the original 110 was launched. Don’t expect 1983 prices, however; those fortunate enough to get an order in will be asked for a minimum of £135k plus VAT.

That will buy one of the diesel Utility Wagons, with the Station Wagon equivalent adding £10,000 to that. The petrol TVS One of Ones start at £174,500 plus VAT for the Utility Wagon, or £184,500 for the Station Wagon. Which isn’t much less than Land Rover asks for an old Defender with a V8 in – although the Trophy looks almost common by the standard of these Twisteds. Bet nobody thought we’d be spoilt for choice all these years later, but then the demand shows no signs of abating, either. Orders are being accepted for the Twisted One of One Defenders now.