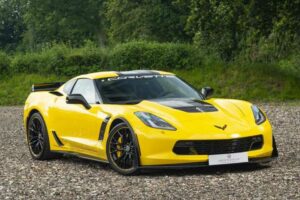 A solitary manual C7.R was supplied new to the UK – it's yours for F-Type R money

The excitement around C8 Corvette Stingrays is easy to understand. There’s the mid-engined, rear-drive layout for starters, a ginormous V8 unfettered by forced induction and the fact that UK buyers will – at last – be able to buy a right-hand drive one. It’s all happening this year, too.

Which is tremendous news, but a C8 Corvette won’t be the first one available to buy in the UK – merely the first RHD. As this C7 proves, dedicated UK buyers have previously been able to buy Corvettes in this country. The keen will note this isn’t just any old Stingray, either, but the very rare C7.R Edition. And that’s rare in the US, with just 500 made; such was the popularity that another 150 were made, and this is the sole car that came here. It’s literally the only C7.R Edition like this supplied to this country. Period.

Some background, first off, for those who don’t know their LT1 from their LT4 and couldn’t tell a ZR1 from a Z06 (i.e, most of us in PH HQ). The C7 Stingray arrived in 2013 with 460hp from a 6.2-litre V8, a wealth of technology and – even when it came to the UK – an asking price well under £70k. Driven here it impressed: “the Stingray suddenly feels keener to turn in, easy to balance on the throttle and much more chuckable and playful than a car of this size has a right to be on a soaking wet winter B-road”, we wrote in 2014. Then the silly ones came…

The C7 Z06 had more power than the old ZR1, with 650hp and 650lb ft from a supercharged V8. Chevrolet went so far as to call it ‘The Big Nasty’, with massive increases in acceleration, grip, braking performance and downforce over the standard car. Apparently, they could be had in colours other than yellow, but there’s little evidence to prove it.

Then came the C7.R Edition. Based on a Z06 but paying homage to the enormously successful Corvette race cars (and possibly even more yellow), it got the Z07 Performance Package as standard alongside other limited edition goodies like a build plaque and unique graphics. Anyone who’s felt a vivid yellow Corvette race car make the earth tremor as it’s thundered by could see the appeal in a C7.R Edition.

One UK customer certainly could. A dedicated Corvette enthusiast who had a C6 Z06 prior to this – and is only selling because a C8 is on the way – they’ve owned the car since new in 2016. It’s been used, too, covering 10,000 miles in that time yet still seemingly in as-new condition – must be that excellent Corvette car cover…

It gets better, furthermore, as this is a manual Corvette Z06 – surely a rare choice in a 650hp car like this. But there it is: seven speeds, three pedals, and 200mph potential. Not something available in the new Corvette, either.

The price? £110,000. A six-figure Chevrolet, yes. But for this car more than any other, it really is a case of find another. Because you won’t. Maybe a regular Z06 will emerge for less money in time, and perhaps a C7.R Edition could be brought in, but they’ll only be one UK car. Which is kind of cool, in a way. And even without the motorsport add-ons and the car cover, this Corvette is still a 650hp, V8 sports car with a manual gearbox – that’s always going to be cool to us, left-hand drive or otherwise.