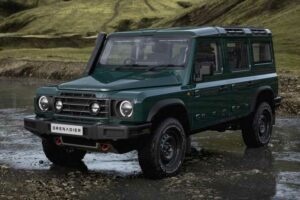 Earlier this week INEOS announced its fledgling dealer network, and told us it was almost ready to start selling cars; now it has confirmed that the Grenadier will be available to order from May 18 – and will cost from £49,000. That was the starting price we predicted when we drove the prototype back in February, and while it looks expensive for such a no-nonsense machine (Ford will cheerily sell you a farm-ready Ranger Double Cab for much less), the manufacturer will likely be content that it has undercut the £53,760 that Land Rover currently charges for the commercially-minded Defender 110 Hard Top.

That’s because, in Grenadier terms, the cheapest price buys you much the same prospect: a two-seat ‘Utility wagon’ with a choice of either a 3.0-litre straight-six petrol or diesel engine, both, of course, supplied by BMW. Needless to say, this is the car at its most rugged, and behind the cargo barrier comes with a full-length flat floor capable of accommodating a standard Euro pallet (i.e. something 1,200mm by 800mm in size). You can option in a rear window if you like free of cost, but otherwise this comes with the blank panel that announces it as the most van-like variant.

Anyone wishing to carry passengers (which we assume will include most Grenadier customers) will need to pay at least £52,000 to access the five-seat ‘Station wagon’. In standard format this retains both the full-height cargo barrier and its certification as commercial vehicle, and is said ‘to provide the optimum balance between payload and passenger carrying capability.’ Finally, if you’re not so concerned with the payload bit, there are the pre-configured ‘Trialmaster’ and ‘Fieldmaster’ Editions, which relinquish commercial status and provide greater comfort for those in the back (presumably because there is no barrier to bang their knees on). Either of these will cost from £59,000.

Mechanically speaking, each variant is essentially the same. The Grenadier is built on a box-section ladder frame chassis, the body is from galvanised steel and there are solid beam axles with heavy-duty coil springs. Every model gets a ZF eight-speed automatic, as well as permanent four-wheel drive and a two-speed transfer case. The choice between diesel and petrol is the choice between BMW’s 249hp/405lb ft B57 oil burner and the direct injection B58 with 286hp/331lb ft of torque. Both are limited to 100mph, although the petrol ought to be noticeable quicker at 8.6 seconds to 62mph (versus 9.9 seconds).

The only model that goes beyond these narrow parameters is the Trialmaster, and that’s because it gets the £1,685 ‘Rough Pack’ as standard, which means it adds diff locks front and back alongside BFGoodrich All-Terrain tyres. This effectively makes it the range-topper, and its deliberate go-anywhere vibe (it also gets a raised air intake, exterior utility belts and an auxiliary battery) ought to make it popular with the money-no-object crowd. The Fieldmaster (these are both named after Belstaff jackets, by the way) is slightly more toned down for the man-about-town, and comes with 17-inch alloy wheels, Safari Windows, leather upholstery, carpet floor mats and heated front seats. Both models also add the £1,685 ‘Smooth Pack’ which buys you niceties like a rear-view camera, park assist, auxiliary charge points and puddle lamps.

Beyond these fundamental options, there is a fairly extensive selection of colours (both solid and metallic), wheels (you can upgrade to 18s if you wish), burly stuff (an integrated 5.5-tonne winch is £3,185) and accessories (the full-length roof rack is £1,659). Fortunately there is plenty of time to get to grips with the online configurator before INEOS will ask for a £2,500 deposit to secure you a build slot. There’s still no official confirmation yet on when customer deliveries are due to commence, but expect the process to begin before the end of the year. Hopefully we’ll get to drive a production car in the meantime, and confirm whether or not the Grenadier has been worth the wait.