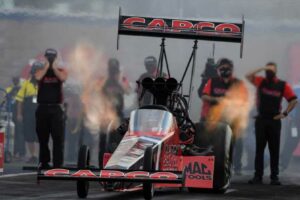 Top Fuel team owner Morgan Lucas was in a no-win situation on the eve of the NHRA’s inaugural Countdown to the Championship in 2007.

The cutoff race—the last one before the pro fields of title-eligible drivers were set—was at Reading, Pa.’s Maple Grove Raceway. And his first-round draw for eliminations was Lucas Oil Dragster teammate Melanie Troxel.

That first year was the only one in which the pool in each pro class was limited to eight racers; it has been 10 ever since. And Troxel had a chance to make the cut as the No. 8-ranked driver—if she defeated Lucas in that first round at Reading.

Lucas was faced with the dilemma of whether to allow Troxel to beat him and get both of the team’s cars in the chase for the championship or to make her earn her berth in it. They discussed it beforehand and decided to race heads-up and see what happened. Lucas beat her, dashing her chances to compete for the title.

He received substantial criticism for not advancing his team’s interests—but he knew he would have received equal amounts of it if he had taken a dive. Troxel said she had wanted to earn a place in the Countdown rather than having it handed to her. She shrugged off the results, remarking that it was next to impossible to win, anyway, from the No. 8 position.

Her prediction has proven true. No one in any of the four professional classes (Top Fuel, Funny Car, Pro Stock, Pro Stock Motorcycle) has won the championship from a No. 8 start. But being the No. 1-ranked racer heading into the Countdown hasn’t been a guarantee. Ask former Top Fuel driver “Hot Rod” Fuller or Doug Kalitta or Funny Car’s Tim Wilkerson—racers who were in the catbird seat to start a Countdown but couldn’t parlay it into a title.

However, Robert Hight, in the Funny Car class, is the only racer to come back from as far back as 10th. He did it in 2009, claiming the first of his three championships and forever giving back-marker drivers hope.

Thanks to the NHRA recalculating points and bunching up the Countdown-qualified drivers by separating them by 10-point increments (with the top driver having a 20-point advantage that can erode in a flash), Hight won the first two playoff races (at Charlotte and Dallas) and immediately was in command.

That manipulation of the standings, which includes a points-and-a-half system at the Finals at Pomona, Calif., arguably is the trigger point among anti-Countdown racers and fans. Plenty of racers through the years have expressed displeasure with the exclusive format, but at this point, they all appear to have resigned themselves to the reality that the NHRA isn’t considering abandoning the Countdown.

The NHRA did, however, suspend the playoff system in 2020 because of pandemic-related scheduling chaos.

•The NHRA has completed 13 Countdowns (none in pandemic-marred 2020).

• Put another way, the regular-season champion has failed to become the series champion 31 times in 52 chances (59.6%).

• Brittany Force (Top Fuel, 2017) and Matt Smith (Pro Stock Motorcycle, 2018) stormed to titles from the No. 6 position in the standings.