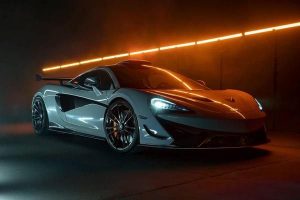 The 620R is intended to be McLaren's ultimate expression of the road racer; seems nobody told Novitec

That a car as raw and uncompromising as the McLaren 620R exists is cause for celebration in 2020. There's little need for it, really, but to experience its incredible levels of grip – even on road tyres – the towering performance and the looks of befuddlement from passers-by is nothing if not entertaining. And we could all do with some cheering up this year. Seemingly, however, some need more perking up than others; and in what's becoming an increasingly regular tradition, yet another of the world's supercars has received attention from Novitec.

It's the familiar round of upgrades for the 620R, with power upped, ride height dropped and wheels enlarged. Novitec says its work "focuses on more power and further optimised handling", and puts "even greater emphasis on the motor racing lineage". Perhaps the biggest talking point, as is often the way with Novitec, is power; equipped with its Stage 3 software and the Inconel high performance exhaust, the McLaren is said to make 711hp, or almost 100hp more than standard, extending the top speed to 204mph. Given the 620's billing as a car very much for circuit as well as street, perhaps here is where a power upgrade might be worthwhile. Another 90hp is probably easier to detect on the back straight than the high street, after all…

Interestingly given McLaren's work to create a motorsport damper for the 620R, Novitec believes it has gone one better on the suspension front by further upgrading the springs. Described as nothing more than "specially calibrated sport springs", they are said to work in conjunction with the forged Vossen wheels to add further agility to the handling. Anyone who's experienced a 620R might find that hard to believe, but it sounds a tantalising prospect, nonetheless.

Prices haven't yet been confirmed for Novitec's upgrades; presumably those willing to shell out a quarter of a million for a roadgoing GT4 car would also be able to cover one or two little extras. Whether they would want to, of course, is another matter. Because the 620R was a fairly extraordinary experience out of the box. Would it be made even more so by additional power and aggression? Or could that spoil such a finally honed formula? Over to you…