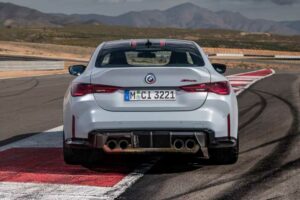 As just the third BMW CSL in M’s 50-year history, and the first since the M3 of almost 20 years ago, you’ll forgive us some more M4 CSL words. That’s because, dubious looks and chunky price aside, a 550hp M4 promises an awful lot; you only need look at recent M cars – the M2 and M5 CS, most notably – to see the potential for another cracker, especially with the standard M4 providing such an auspicious base.

The high price is hard to escape, though, much as it often is with the uber BMWs. Lauded it might very well be now (and worth a heck of a lot of money), but there was uproar in 2003 when the M3 CSL commanded a price almost £20k above the standard car for a mere 17hp extra. Of course, back then it took the M3 from fast 3 Series into 911-rivalling territory – funny how some things never change.

Nevertheless, with a potential maximum spend on an M4 CSL of £131,975 (including the Ultimate Road Pack at £2,950, the BMW M 50 Years Badges for £300 and £500 tracker), there’s a mouth-watering array of track-ready alternatives on offer. Especially if it’s a Nurburgring-crushing road racer you’re after. And honestly, who isn’t…

Yes, yes, we’re over budget with the first pick, but as the car most aligned with what the M4 CSL represents – a four-seater made into two, loadsa power, an awesome Nurburgring time and a whopping price – the Jag had to feature here. The Project 8 is arguably the most viable actual alternative here if you’re into the CSL thing.

Back when the Project 8 was announced in 2017, a 600hp V8 XE looked bold; now, just a few years later and with Jag on the brink of an all-electric rebirth, it looks like the most wonderful kind of lunacy. While the epic supercharged V8, 200mph potential and wild looks hogged the headlines, so much of what made the Project 8 brilliant was in the less obvious; remember all this effort was for a mere 300 cars, too. Every single body panel was new, the aero package obviously bespoke (including a flat underbody), the ceramic brakes used F1 tech, and the ride height was manually adjustable, all of which made a 7:23 Nordschleife lap possible. Not bad for something weighing 1,800kg.

This one is spectacular even by the Project 8’s heady standards, a one-owner car with just a hundred miles on it and specced with the £10k Track Pack that replaced the XE’s rear bench with a half cage. It’s a car that looks madder (and therefore even more desirable) with every passing day, particularly in lurid green. Thank goodness Jag made it happen. Let’s hope someone gets to experience its full (and considerable) potential soon.

Obviously a story like this couldn’t happen without a Porsche GT car – they’re the go-to road racer for good reason – but which to choose? The M4’s RRP neatly splits the old 991 generation of GT3, a little more than the early 3.8s and undercutting the later 4.0s; £130k still buys a 997 RS, too, though pitching a 15-year-old 911 as a CSL alternative seems a stretch too far.

This 2014 GT3 gives pause for thought, though. It won’t scythe through every bend of the Nordschleife quite as adroitly as a 992, but it will still provide a thrill like only the GT 911s can. The 475hp flat-six will howl to 9,000rpm, the PDK ought to make the BMW’s auto feel a tad sluggish, the electric steering (including 4WS for the first time in a GT3) has only been improved by later Porsches and nothing will stand up to a weekend’s track daying quite like a Motorsport 911. They really are as absorbing as you’ve heard a zillion times before.

This one looks hard to fault. It’s a Carrara White GT3 with the Clubsport Package, meaning a cage for full road racer kudos and proper buckets to clasp you tight. It’s approaching 19,000 miles and for sale at Porsche Centre Cardiff for £111,990, so they’ll even be some great roads to take in on the way home. Not often a Porsche is the most affordable of a bunch, either…

With the awesome GT R Pro and extraordinary Black Series having followed since, it can be easy to forget what an impact the plain old GT R had back in 2016. With the standard GT and GT S having impressed but not really inspired, the R was unforgettable – almost 600hp, four-wheel steer, the Green Hell Magno paint and a formidable 7:11 Nurburgring lap made sure of that, even if the latter might have required some very trick tyres.

AMG really went to town on R, adding 16kg lighter manually adjustable buckets (in a Mercedes!), increasing the torsional rigidity, widening the tracks, fitting four-wheel steer, conjuring a heap more downforce and equipping the GT with, memorably, the nine-stage traction control that borrowed learnings from the successful GT3 racer. It was so clever BMW came up with its own system for the M4, the M Traction Control, only with 10 settings…

This particular GT R Pro has the paint (last green car in the list, promise), and is in great nick having covered a mere 6,000 miles in five years. There’s a handy saving off list price, too, at just over £120k. Or, for some more old school AMG circuit fun, how about a C63 Black Series? Its legendary reputation means £130k is needed for one of those, too. Won’t be as sharp to drive as a GT R, but it’s V8 might be even more astounding…

If ever proof was needed that heavy cars can be absorbing track cars (i.e. if some suspicion remains that the CSL might be found wanting at 1,600kg+) the GT-R NISMO ought to allay those fears. Building on the stupendously good R35, the first GT-R NISMO of 2014 was borderline unbelievable. The 7:08.679 Nordschleife lap claim actually was a bit iffy (using parts that customers couldn’t buy), but the very fact that something as massive as a GT-R could get that close to seven minutes was some achievement. Despite some naughty aero bits, 600hp, a stiffer body, overhauled suspension and sticky Dunlops were doing plenty of the heavy lifting as well. Quite literally – the NISMO was only 20kg lighter than standard, and therefore more than 1,700kg.

The GT-R’s freakish ability to manage that mass and use it to its dynamic advantage has always been one of its selling points, a trademark the NISMO further cemented. For all its dodgy reputation and drawn-out demise, a GT-R NISMO can still blow you away with its mesmerising ability – no mean feat for something now 15 years old. This 2015 car is modified, seemingly inevitable even on the flagship. But the upgrades have been carried out by Litchfield, so it’s work that can be trusted. And 740hp does sound kinda fun, right?

Another 3.8-litre, twin-turbo track car with 600hp, the McLaren is the polar opposite of the Nissan as an experience. Yet both are worthy of inclusion here, reflecting what a fine few years it’s been for the circuit-ready sports car. Both could get you to a track day in relative comfort, lap as fast as anything else on treaded tyres, then whisk you back home again – for hundreds of thousands less than the dedicated circuit exotica.

For the 600LT, McLaren employed the same methods that transformed the 650S into the 675LT. Additional power (in this instance, 30hp from the 570S) wasn’t the big news; the transformation came with reduced mass and detail chassis tweaks, turning a fantastic supercar into an utterly magnificent one. The Longtail treatment wasn’t as shocking second time around, but it was no less effective (if not more so, given the better sorted base car) for Sports Series as for Super Series: the 600LT was just as adept as the lithe, supple and engaging sports car as it was hypercar-harrying track weapon.

Without quite the icon status of the 675LT and now overshadowed somewhat by the 765LT, the 600 looks very good value indeed. Spend £150k and it’s possible to get a three-year-old McLaren approved car still with a four-figure mileage. For a car this sensational to drive, that doesn’t seem much. This one gets within £5k of the top end CSL figure thanks to a higher-than-average (if still low) 13k; five minutes behind the wheel should do all the convincing to add many more to that total.

For something close to parity with the M4 CSL, a new Vantage F1 Edition really ought to be here, with its 535hp turbo V8 and – just like the BMW – a kerbweight rather chubbier than seems ideal. But however impressive it’s turned out to be, the F1 doesn’t seem likely to be an Aston icon of the 21st century. The V12 Vantage S, on the other hand…

You’ve heard it all before, but there’s no question the S realised the potential that had been lurking in both the Vantage and the V12 engine, more powerful than the original 5.9-litre Vantage (now with 568hp) but better sorted dynamically as well. It was already the best Vantage there was, then came the manual gearbox in 2016 – that ensured legendary status.

A GT12 will be better suited to track driving, but that’s paddleshift only and more than twice the money. Even as the least focused offering here, it’s hard to imagine handing over M4 CSL money for a V12 Vantage S manual and being downcast; even if, like everything here, they are a little more money than very recently. This one is an Aston approved car – what it calls ‘Timeless’ – being sold with 21k on it. There are Speedshift cars available for less but, well, if there’s a V12 manual option, you’re going to take it – right?