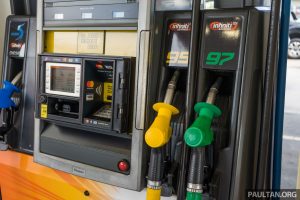 After the confusion surrounding a police deputy director’s comments yesterday, senior minister of defence Datuk Seri Ismail Sabri Yaakob has cleared the air regarding the supposed requirement to scan a MySejahtera QR code before filling up with fuel in his press conference today. In short, there is no need to register using the contact tracing service, unless you’re entering the petrol station’s convenience store to pay.

“At today’s meeting, we have further defined the SOP [standard operating procedure] at petrol stations,” he said. “For those who are filling up with fuel at the pumps and are paying using credit or debit cards or online applications, who do not need to enter the store to pay, you don’t need to register using the MySejahtera app or manually. Just swipe your card, fill up with fuel and go.”

The rules have also been relaxed those paying for fuel through the “pigeonhole” pay windows outside the store. “There’s a glass window to protect them, there’s no contact between the cashier and the customer, and the customer doesn’t enter the store. So they also do not need to register. If there’s a long line, that might be a different story,” Ismail Sabri added. Individuals using the air pumps to fill their tyres are also exempted from the requirement to use the MySejahtera app, he said. However, those that enter the store to pay for petrol or goods, use the in-store ATMs, go to the toilets or surau, or send their cars for servicing or washing (except at automatic car washes) will still need to scan the code or register manually.

The minister said that the confusion stemmed from how premises were defined under the contact tracing ruling. “We did have an SOP before, but there was some confusion when we talked about petrol station premises,” he said. “Some people believed that the word “premise” referred to the convenience store [inside the station], while others thought it referred to the entire station compound.”

More information can be found at the Ministry of Domestic Trade and Consumer Affairs (KPDNHEP) website, where a more detailed guide regarding petrol station SOPs will be released, Ismail Sabri said. So, after consulting with the health ministry’s Crisis Preparedness and Response Centre (CPRC) and the National Security Council (MKN) twice, we finally have a definitive answer from the man himself. Just to clear the air, we’ll spell it out for you readers.

You do not need to scan the MySejahtera QR code or sign in manually if you are:

You do need to scan the MySejahtera QR code or sign in manually if you:

What do you think of the latest ruling? Sound off in the comments section after the jump.