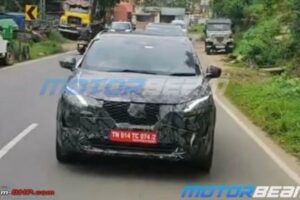 Besides the Qashqai, Nissan is also evaluating the Juke for the Indian market.

Last month, Nissan announced that it was evaluating two SUVs for India. These include the Qashqai and the Juke. The former has now been spotted testing in India for the first time.

The test mule seen in these images is heavily camouflaged, however, one can clearly see the SUV’s LED daytime running lights and the typical V-motion grille.

In the international market, the Qashqai is offered with two engine options. These include a 1.3-litre mild-hybrid paired with either a manual or automatic transmission and a 1.5-litre E-Power strong-hybrid producing 188 BHP and 330 Nm. The latter is paired with a continuously variable transmission (CVT).

Nissan hasn’t revealed details of the India-spec Qashqai yet. If launched, the SUV is likely to be imported via the CBU route.