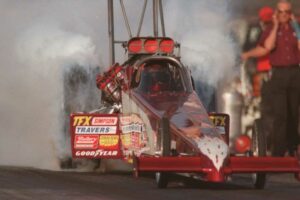 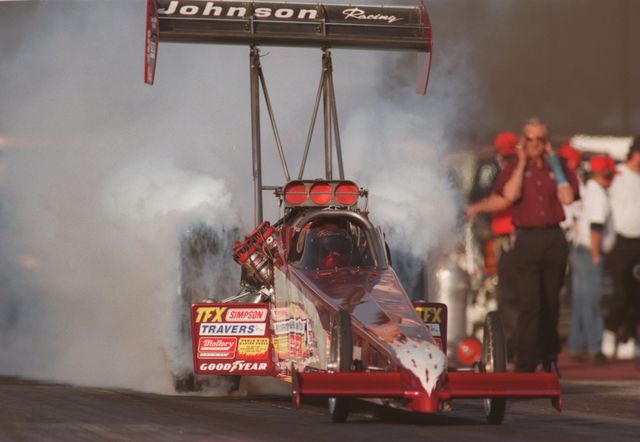 Between their portraits and renderings of their racing machines is a banner reading “Thunder in Heaven.” Both were killed on the racetrack at Indianapolis during the 1996 U.S. Nationals. And as the NHRA community marks the 25th year since of one of the darkest weekends in its 70-year history, McBride and others look back on the string of tragedies that claimed Johnson’s and Trett’s lives a day apart. 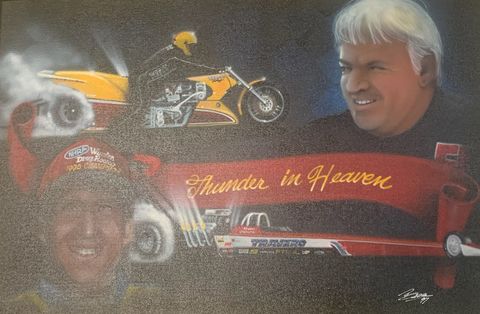 Johnson, the nitro wunderkind who was leading the Top Fuel standings and locked in a championship chase with savvy, more-experienced Kenny Bernstein, experienced a fiery engine explosion toward the end of his track-record run for the No. 1 qualifying honors. That caused his rear slicks to explode, taking out the downforce-dependent rear wing, and his out-of-control car hit one wall then the other.

Ultimately, Johnson’s car smashed into an opening in the wall in the shutdown area. Although he was airlifted to Methodist Hospital for surgery, his head injury and other wounds were not survivable.

About 24 hours later, in about the same spot on the racetrack as Johnson’s accident, Trett was thrown from his motorcycle, which was traveling at 232 mph. He somersaulted violently across the path of competitor Tony Lang (who later would marry Trett’s daughter Gina) and into the sand trap. Trett died at the scene, leaving fans stunned and racers grieving and questioning their futures in the sport.

“Normally I would do that if there was a big wreck or something. I think about safety issues and why this happened and why that happened. So there’s nothing like going there and seeing for yourself. At the time, I didn’t realize when he crashed that it had taken his life, that he had died,” he said. “But I went down there and they took him out of the car and he for sure was dead. That shook us all up.

“But the thing that blew me away was that the next day, Alan Johnson [his brother and crew chief who had navigated Blaine Johnson through four Top Alcohol Dragster championships] – and the whole family – was back at the racetrack, tuning on Jim Head’s car. I was thinking, ‘Man, this is some tough son of a bitch, and nothing fazes him. So he’s going to be quite a racer someday. Sure enough, Alan Johnson proved to be one of the best that ever tuned an engine, if not the best.”

Prudhomme said he concluded that “these people are really crazy about drag racing, or that’s the way they show their grief or something, by just going back and keep going, I guess. But to see his brother get killed and he’s at the track the next day, it just stuck in my mind. I’m not talking down on them. I’m just talking the fact that I don’t know how I would have handled it if that would have been me. I really don’t think I’d be at the track the next day, that’s for damn sure.

“I said, ‘What’s this all mean? Is this drag racing that important? Is it that big a deal?’ I mean, this guy lost his life and you just start up another car and go. It just puzzled me,” Prudhomme, often described as ice-cold über-competitive, said.

“It’s a terrible thing, the worst thing that could happen,” Bernstein said. “But the bottom line, at that particular time, was ‘Let’s get back after it and try to win this race and win this championship.’ I know Alan felt the same way. I know Alan pretty well, and I know how determined he is, how talented he is. And he didn’t want to be sitting in a hotel room, I can tell you that right now. He wanted to be out there, working on something to, I’m sure, take his mind off of it.”

Bernstein, caught in a unique position, had a crossroads decision to make, too.

“We had just beat him [Johnson] at the previous race in Minnesota, and we were going into the home stretch. We were behind, but we were running really good, and we were getting close. So when he crashed, and it sounded so bad, [wife] Sheryl and I, after the end of that day, we went to the hospital and stayed there.

“I didn’t know him very well. We weren’t best of buddies like [Joe] Amato and I were. But I had so much respect for him and for Alan and how they ran their cars and everything about it. I just told Sheryl, ‘We need to go to the hospital’. We stayed down there for quite a while, and it really affected me. I didn’t know for sure then when we first got there, if he was gone or not, but soon someone came out a little later and told us. It just took all the wind out of your sails,” he said. “It just absolutely made what was a wonderful weekend to be and enjoy at Indy just terrible, just absolutely didn’t know if you even wanted to go on or not.

“I found that very, in some ways, strange, because, again, I didn’t know Blaine real well. I just knew him. He wasn’t a close buddy or anything, but it was so much I felt about racing him, and I’m sure he felt that about us, too. I thought about it all night long, and I really was down,” Bernstein said. “When I got to the track the next day, my team was in the same boat I was in. They were absolutely down and just distraught and no energy. I guess all of us were thinking that did we really need to be there. It was just that bad. It affected all of us. The whole pits were that way. Everybody was that way.”

He said, “I got to thinking about it pretty hard there and I realized that we got to go on. We got to race today, and we got to take care of business. As bad as this is, we can make one of two choices here. So I pulled my team together and I said, ‘Guys, here’s the deal. We got two choices here. We can either pack this thing up and go home and be done with it for the weekend. Or we can stay here and race.

“Let me tell you something that’s going to happen: This race is going to go on. The season is going to continue. And someone’s going to win a championship. I want you guys to think about that and how bad you want to have a chance to win. No, it won’t be a win that we feel as good about, because we didn’t get to race Blaine when he was leading the points. We didn’t get to race him down to the wire and beat him that way, but we didn’t make this thing happen. It’s put in our laps, and we have a choice. My choice is to get up off the floor, go to work, and try to win this race and try to win a championship.’”

Bernstein did win the 1996 championship and presented his trophy to the Johnson family that November.

“It was a real up and down [emotional ride], up getting to race, down when we lost him, and then back up again, trying to get everybody to go forward and do the best you can.”

“We were having a hell of a battle. Don’t know who really would have won.”

At the awards ceremony, Bernstein acknowledged that “we were having a hell of a battle. Don’t know who really would have won. Blaine was ahead. There’s no question about it. As good as they ran, we might not have caught them. But we were running awfully good, too. But the point is, I feel like this trophy is as much his as it is mine.”

Ironically, the next day, as the Bernsteins were riding up the return road in the tow vehicle following a run, Sheryl happened to see Trett rise off his motorcycle in that fateful incident.

McBride was astride his bike, waiting in line behind Trett, but he said the sad day mercifully had faded into dusk and he couldn’t see Trett’s fall. But he is one of the few who has seen video of the incident. “That was an ugly deal, man,” McBride said.

“That morning, his blood pressure was low. We had breakfast together that morning. We had pancakes and stuff, and his blood pressure came right back up and he started feeling good. He still wasn’t feeling as good as he should have. It’s just my personal opinion only… I think when he shut the throttle off, all the g-forces, all the negative Gs, that he pulled, I think he got kind of blacked out. We’ll never know what happened exactly. But we do know that his right hand came off the handlebars and the wind got him and blew him off,” he said.

“I was just throwing-up-sick. I was in such disbelief, because he was the king, you know? How could this possibly happen? We didn’t even run the bikes after that,” McBride said. “I was so devastated that I couldn’t ride. I said, ‘I’m done. I’m quitting.’ His wife came to me and said, ‘No, Larry. You can’t quit. You’ve got to keep going—you’ve got to keep this sport alive.’ I felt very honored and very flattered that she even felt that much of me to tell me that. It was a lot of pressure, because you couldn’t fill his shoes. There was one Elmer Trett and one only.

“And he was such a cool guy and so soft spoken. He was a big man, but he was so soft-spoken you had to listen when he spoke, because he didn’t speak very loud,” McBride said. “People had so much respect for him. He just had a thing about him when he came up to somebody it was automatically like he was the king. Just a lot of charisma is all I can say.”

He said Trett “was a great man. Elmer was one of my best friends. We think about him all the time. He was such a dear friend of mine. He did so much for me and my family through hard times. He was just a good man.”

Such good men, such keen racers, such a loss for the NHRA. Prudhomme did say, though, that the NHRA is “doing a lot better job at it now. They still have that underlying problem at blowing the engines up. Fortunately, the cars are a lot safer than they were back then. There wasn’t that much protection. I know when (Johnson) hit that guardrail, I don’t think anything could have saved his life. But you just have a lot better chance in today’s car.

The NHRA has not been immune to off-track tragedies at events, either, and 1978 marked another dark weekend in the series’ 7o-year history.

Freelance camera operator Joe Rooks was killed at Indianapolis Raceway Park during the 1978 U.S. Nationals, struck by a supercharger that broke loose from Frank Rupert’s crashed dragster. At that same event, one fan in the grandstand was fatally shocked and several others injured by contact with a live electrical wire.

But the deaths of Blaine Johnson and Elmer Trett at Indianapolis in 1996 marked the biggest single-weekend on-track loss in U.S. Nationals history.