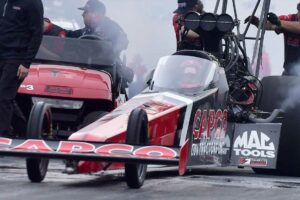 This 44th overall victory gave him his third victory at Summit Racing Equipment Motorsports Park since 2017.

“You’ve got to go out there and throw everything you can at it and be in the right spot at the right time,” Torrence said.

Torrence has been on a torrid pace both here and on the Camping World Series tour overall since he missed this race in 2016 after experiencing a minor heart attack. (Doctors in his Kilgore, Texas, hometown have said it likely was because of radiation treatments he underwent as a teenager during treatment for Hodgkins lymphoma. He asked if he was able to go back to work and the doctor said, “Sure. What do you do?” That certainly startled the doctor, but Torrence was racing his 11,000-horsepower, 330-mph dragster two weeks later.)

In six Norwalk appearances before his heart issue, he had a 6-6 record with no winners-circle appearances. Since then, he’s 14-1 with victories in 2017, 2019, and Sunday. Overall, Torrence has earned 39 of his 44 Top Fuel victories since sitting out the 2016 edition of this event. During that stretch, has won 243 of his 307 individual matches.

After reeling off a first qualifying pass Friday that came within four-thousandths of a second from tying the track elapsed-time record, he cheerfully said, “Now I’m going to go get some ice cream.” This facility is famous for its $1 per pound ice cream, which has inspired the tradition of winners receiving a special ice-cream-scoop trophy along with the Wally statue. Now he has the ice cream and the scoop and the Wally trophy.

His Top Fuel teammate father Billy Torrence won the previous race, at Epping, N.H. So that gives the Torrences the past four victories and five in the series’ seven completed races.

Force’s runner-up finish, her second of the year, salved the sting of first-round exits at her previous two events. 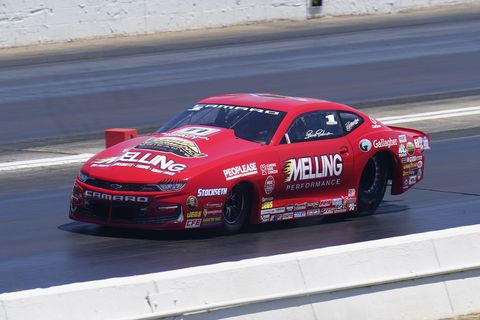 Greg Anderson will have to wait three weeks for his next chance to make history. He’ll have another shot of tying Warren Johnson for the most victories in the Pro Stock class and second-most among all racers in the sport’s history at 97 at the July 16-18 Dodge/SRT Mile-High Nationals at Denver. That will kick off the Camping World Drag Racing Series’ Western Swing.

Anderson, the No. 1 qualifier in the Summit Racing Equipment/Hendrick Cars.com, has led the Pro Stock points all season, won two of the first three events, and topped the qualifying charts at all but one. 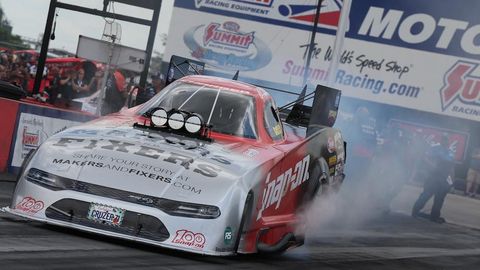 Overdue Cruz Pedregon Gets Back Into Funny Car Win Column

Funny Car veteran Cruz Pedregon said before the event began that he believed he is “on schedule to have some great runs in the near future.” The future is now for the two-time class champion who was long overdue for a victory and earned one against final-round foe Bob Tasca III Sunday. Pedregon’s previous triumph came at the April 2018 Charlotte four-wide event.

The Snap-on Dodge Charger Hellcat driver denied Tasca a shot at his third victory in seven races with a holeshot performance. Pedregon’s .058-second reaction time made the difference in his winning 3.958-second elapsed time at 324.75 and Tasca’s better-on-paper 3.913, 332.02.

“We have been prepping for a winning season, putting in so many hours,” Pedregon said, “and there’s nothing quite as rewarding as coming out on top and holding up that trophy at the end of a race weekend. What a great job John [crew chief Collins], Rip [assistant tuner Reynolds], and the team did to get us ready for this race. What a real triumph for us all, especially after the 2020 season. We really appreciate our sponsors and great fans for sticking with us and giving us the additional boost of confidence we needed. That support is what makes it all possible.”

He said, “We’ve been running top speed of all the cars, even Top Fuel, so it shows that the HEMI power is there. We’re putting it to the ground and looking to improve little by little and start winning the rounds that have come as close as .0003 seconds.”

Collins worked during the two-week break in the schedule to improve Pedregon’s position in the car and focused primarily on head clearance and adding a chin strap to the helmet that’s been rubbing the roof of the car. And for Pedregon, it’s “it’s running better and better all the time,” he said.