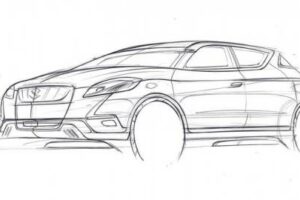 The next-generation S-Cross is said to be one of two products currently under development by Suzuki.

Reports suggest that the Suzuki S-Cross could get a complete revamp in terms of its design, while also offering some form of electrification, in-line with the brand’s commitment towards sustainable mobility.

The next-generation S-Cross is also said to be one of two products currently under development by Suzuki – the other being the new-gen Vitara.

While details of the next-gen Suzuki S-Cross is scarce, reports do suggest that the upcoming model will continue to be powered by the brand’s 1.5-litre petrol engine with a 48V hybrid technology. The S-Cross could be offered with the 1.4-litre Boosterjet engine as well. Both engines will be offered with a choice of manual and automatic transmissions.

Earlier this year, there were rumours of the new-gen Suzuki S-Cross coming to India in 2023. The current model received its last update in 2020, featuring the BS6-compliant 1.5-litre petrol engine with the hybrid tech, along with a few subtle design updates as well.