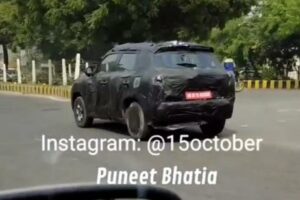 The next-gen Vitara Brezza is likely to arrive in 2022 as a rival to the Tata Nexon, Kia Sonet, Hyundai Venue, Nissan Magnite and the Renault Kiger.

The next-generation Maruti Suzuki Vitara Brezza has been spotted testing. It is expected to be launched in 2022 as a rival to the Tata Nexon, Kia Sonet, Hyundai Venue, Nissan Magnite and the Renault Kiger.

The heavily camouflaged test mule seen in these images seems to be an early prototype. The overall shape of the vehicle looks similar to the current Vitara Brezza. It has flared wheel arches and a gently sloping roofline.

The new model is expected to get a revamped interior. Rumours suggest that the car could be offered with 6-airbags and a larger touchscreen infotainment system with connected tech.

Under the bonnet, the new Vitara Brezza could use the same 1.5-litre petrol engine as the current car. It produces 104 BHP and 138 Nm and is likely to be paired with a 5-speed manual and a 6-speed automatic, instead of the ancient 4-speed slushbox.