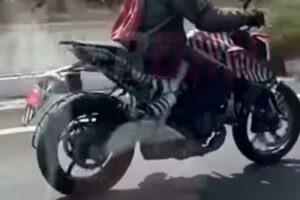 Testing runs of the next-generation KTM 390 Duke have commenced in India. This can be confirmed via the spy images of the bike that have recently surfaced online.

The 390 Duke has undergone a major overhaul. The test bike features redesigned fuel tank extensions and a revised headlamp unit. The bike is also expected to get a new digital instrument cluster.

Besides the cosmetic updates, we can also expect some changes to the chassis. The test bike appears to have a redesigned frame, an asymmetrical swingarm and an offset rear monoshock. Lightweight 5-spoke alloy wheels are also likely to be part of the package.

Details of the engine powering the new 390 Duke are still scarce. However, we can expect a few upgrades in this department as well. The current model is powered by a 373.2cc, single-cylinder engine that puts out 43 BHP and 37 Nm.