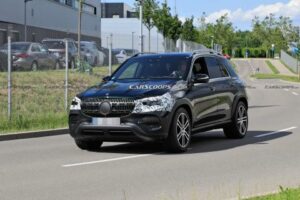 The 2022 GLE SUV is expected to receive a minor facelift, ahead of its debut sometime early next year.

The 2022 Mercedes-Benz GLE has been spotted testing internationally for the first time. The 2022 GLE SUV is expected to receive a minor facelift, ahead of its debut sometime early next year.

As seen from the spy images, the upcoming GLE facelift SUV features a revised front grille, updated set of LED headlamps, sportier front bumper with larger air vents. The rear is also said to feature an updated tail lamp cluster, which can be seen camouflaged in the spy images. However, being just a facelift, expect the 2022 GLE to carry forward the same silhouette and stance.

While there are no images of the interiors, reports do suggest that the GLE facelift could come equipped with a new steering wheel, similar to that on the updated CLS and S-Class models. Mercedes-Benz could also introduce the GLE facelift with a larger tablet-like infotainment unit, along with a host of other minor updates and cabin revisions.

Reports also suggest that Mercedes-Benz is expected to update the powertrain options on the upcoming GLE facelift. However, the exact details are yet to be revealed.