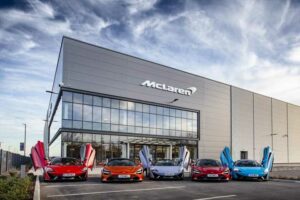 McLaren has had a tumultuous few years, essentially ever since the ‘C’ word became common parlance. We mean Covid, of course. Sure, the Formula 1 side has seen a general uptick in performance over the last three years, but sticky financials have prompted redundancies, a major cash injection from majority McLaren Group owner Bahrain’s Mumtalakat group, a secured loan from Bahrain’s national bank and a buy-in from MSP Sports Capital, a consortium of US sports investors that took a stake in the racing division. It’s even had to sell its iconic Woking headquarters to raise funds and lease it back on a long-term deal.

In among this turmoil, there have been rumours of a buyout by BMW and Audi, and then there is the delay to the Artura – its new, mid-engine hybrid challenger to the Ferrari 296 GTB. Some have credited the latter, along with the internal friction that resulted, as being one of the reasons for Mike Flewitt’s departure last year, following an eight-year stint at the top. Either way, with a considerable to-do list looming, a high profile replacement was clearly due – and today arrives in the form of Michael Leiters, who starts as CEO of McLaren Automotive from the 1st July 2022.

Leiters has predictably strong credentials, and would seem to be the man McLaren needs at this time. He will be based at Woking, but he’s German. This isn’t of itself a point to focus on, but, as is often the case with German board members of car companies, his grounding is in engineering – he has a doctorate in engineering rather than a fluffy MBA in business. And he has held high office at Porsche AG – where his deep involvement in the Cayenne’s development may or may not have had a bearing on his appointment – and, more lately, Ferrari, where he was Chief Technology Officer.

“On behalf of everyone at McLaren, I am delighted to welcome Michael as the new CEO of McLaren Automotive. His extensive industry leadership experience combined with his passion for engineering and future technology will help guide and develop our team as we enter an exciting second decade,” noted Paul Walsh, the Executive Chairman of the McLaren Group.

Leiters’ role will include steering McLaren’s 3,000-strong workforce and ensuring the Artura’s smooth transition into the market, with deliveries set to begin soon. Naturally he will also focus on maintaining demand for current products, which have positives stories attached: the 765LT Coupe and Spider variants have sold out, along with the Ultimate Series Elva. Nevertheless, as Leiters’ himself indicates, his performance will ultimately be graded on the next steps he takes as McLaren is obliged to conceive of a world beyond combustion.

“I could not be more excited to be joining McLaren Automotive as CEO at this important moment in its journey,” he remarked. “McLaren is already recognised as one of the world’s most admired luxury supercar companies. I look forward to growing that reputation for our loyal customers, employees, fans and partners as we write the next chapter in McLaren’s illustrious history.”