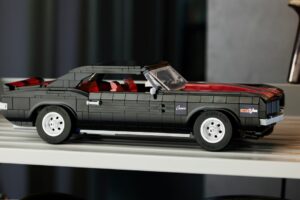 Lego has just announced the newest addition to its range of iconic car models – the 1969 Chevrolet Camaro Z28. The toy brand put a brick-built version of the Back To The Future DeLorean on sale just a few months back, but we’re happy to see the Camaro has finally arrived to take on the Lego Ford Mustang GT that was released a few years ago.

We love Lego, but sometimes brick-built models of real cars can end up looking unconvincing and awkward. Thankfully, that’s not the case for the Camaro. The set is made up of 1458 pieces and so many details have been packed into the model to make it feel almost as authentic as owning a real one. It measures 36cm long, 10cm high and 14cm wide, though, so you won’t need to own a garage or search for a hidden parking space to look after it – it’ll be right at home on your bookshelf.

The Lego Camaro has functional features such as an opening boot, bonnet and doors and a working steering wheel. The engine bay is meticulously detailed, too – we can’t wait to put together that brick-built V8 heart. From the pictures Lego has released, it even looks like the car comes with a pair of fluffy dice hanging from the rear view mirror – the epitome of ’60s cool…

Arguably the best feature of the set is the sheer amount of customisation you can do to your Camaro. The muscle car comes in a gloss black colour, but builders can choose to add red, white or grey racing stripes. You can even choose to build it with classic or hideaway headlights and choose between a coupe or convertible body style. It’s like having the real 1960s options catalogue right in front of you.

The real Chevy Camaro Z28 was launched for the 1967 model year and was the brainchild of a man called Vince Piggins, who developed the Z28 package as a race-ready option to take on the Ford Mustang GT. Although the 1967 and 1968 models were mechanically similar, many consider the 1969 Camaro Z28 to be the pinnacle of the first generation – this model year brought a slightly lower, wider stance plus a few revisions to the body.

The Lego Chevrolet Camaro Z28 will cost £144.99 in the UK ($169.99 in the US and €169.99 for European buyers.) The Lego Camaro Z28 will be available to buy from 1 August as part of the Lego Icons range which includes more challenging sets geared towards adult Lego enthusiasts. We’re already hovering over the ‘add to bag’ button in anticipation…