New-gen Mahindra Scorpio tailights in the market ahead of actual car! 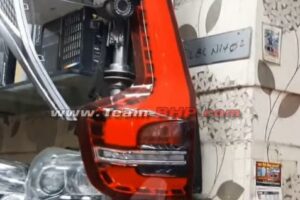 The Scorpio’s taillights have arrived at Karol Bagh, even though the launch of the new SUV is still some time away.

The next big new car launch from Mahindra will be the new-gen Scorpio. We still don’t have the exact launch date and apart from a few spy shots and a low-res leaked image, no one knows what the final production car might look like.

However, the SUV’s taillights have already hit the market, even though the launch of the new Scorpio is still some time away. This image, taken at Delhi’s famous Karol Bagh, shows what seems to be the production-spec tail lamp of the Scorpio.

If you look closely, the shape of the tail lamp cluster is similar to those seen on the test mules. The horizontal chrome insert can also be seen in some of the images.

The new Scorpio is expected to be based on a ladder-frame chassis. It could be offered with a 2.0-litre diesel engine producing 158 BHP, paired with either a 6-speed manual or an automatic transmission. An all-wheel-drive system could be offered on select variants.

Thanks to Harsh Sharma for sending this image in. Heartfelt gratitude for sharing it with other enthusiasts via this Team-BHP share page!