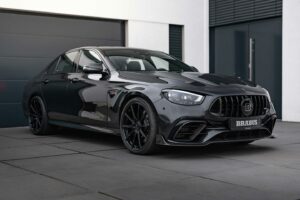 "A wolf in sheep's clothing" says Brabus, with twice the torque of an A45

We all know what a traditional Brabus looks like. It’s a big, black, brooding Benz saloon, one identifiable to those in the know but not immediately obvious to the casual observer. Which always made them quite cool; if not exactly Q cars, the old-school Brabuses were unassuming given their ferocious potential. Recent models – mostly those based on G-Classes – have been more overt and less in keeping with that iconic aesthetic, which felt a bit of a shame. Some of them, heaven forbid, were even grey. Now Brabus has announced a return to the old ways, with a 900hp E63 blacker than a goth’s darkroom – excellent.

Though Brabus is keen to suggests that this new 900 is a “wolf in sheep’s clothing”, these things are all relative; against a G63 with a similar output it is reasonably discreet, although there are some fairly noticeable giveaways here. Though all for stability at really, really high speed, which is cool, there’s no hiding the carbon aero enhancements – see the new front splitter, side skirts and diffuser. Those wheels are 21-inch in diameter, too. That said, given the fake AMG affliction seems to have made its way to E-Classes as well now, this might fit in better than expected. This one has clear glass and everything. Take the badges off and it might – might – even pass for another AMG Line diesel.

Well, as a stationary object, at least. Like all the 900-badged Brabuses of late, this E63 takes the renowned hot-V 4.0-litre V8 and cranks up the potency to an obscene degree. Don’t forget this is a 612hp, 627lb ft car to start with. Fiddle with the ECU and swap the exhaust and it’d be well on its way to 700 points for both, but that’s not the Brabus way. Instead the engine is bored and stroked to 4.5-litres, each of the eight cylinders now measuring 84mm by 100mm; special pistons, rods and a crank are made for the application. Brabus’s own turbos are used, too, boosting up to 1.4 bar, along with a new exhaust, intake upgrades and ECU work. The 900 makeover retains Euro 6D compliance, however, the official combined mpg is 25, and the quad exhaust system is even fitted with a ‘coming home’ mode, for those occasions when a “decidedly powerful eight-cylinder sound” isn’t strictly appropriate.

Though bordering on the familiar now, the results of this 4.5-litre upgrade remain staggering: this is a 900hp E-Class, reined in to 774lb (instead of the maximum 922lb ft) to protect the driveline from disintegrating. But Brabus does warranty the work for 62,000 miles, so buyers should have nothing to fear about tapping into the outrageous potential. Using the standard nine-speed auto, Brabus says the 900 will reach 62mph in just 2.8 seconds, double that in less than 10, and the standard cars 186mph limiter in just 23.9 seconds. There is speed restrictor for this car, too, but it’s set at 205mph – “in order not to overstress the tyres”. They’re only Continental SportContact 6s, after all, and they don’t very often have to deal with two tonnes doing more than 200. A ride height drop of 20mm works in conjunction with the aero enhancements to keep the Brabus stable at those almighty speeds.

Otherwise, the 900 is as per every Brabus conversion – whatever the customer wants and can pay for, they can have. But given this car has had every bit of chrome and plastic outside painted black, you can see the look Brabus is aiming for. The most colourful bit on it is the red carbon engine cover. Just as it should be, some might say.

Also in the manufacturer’s best tradition, the 900 won’t come cheap. Because boring and stroking AMG V8s never has been. There’s a 900 already for sale on Brabus’s website, at €327,873.56 exactly, or £270,072.95. Which is obviously a huge amount of money. Buyers wishing to submit their own commissions are invited to do so now, or Brabus can convert existing E63s in stages. And for those feeling brave enough, who wouldn’t be intrigued by a 900hp wagon, without any aero add-ons at all? This one has the dog mat already installed…