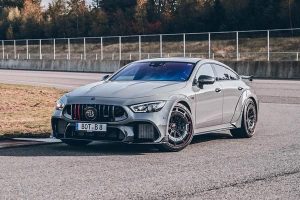 The boys and girls of Bottrop say this is "a new masterpiece"; we're inclined to agree

This is a coincidence, honest. Because only yesterday we were discussing a mad, bad Brabus creation in the form of this 850hp E-Class, and only the week before that the CLS-based Rocket of the mid-2000s. It all would have led quite nicely into the news of a new Brabus Rocket but, Scout's honour, we didn't know. Still, worse things to have than a surfeit of Brabus news…

This latest Rocket adheres to a lot of the criteria that's come to define the tuner's flagship. It has more engine than it can handle, to start with, a 922lb ft peak reined in to a feeble 774lb ft; it's also preposterously fast – kind of has to be, really – with a 0-186mph time of 23.9 seconds; and it'll be exceptionally rare again, with 10 to be made.

There are some key differences against old Rockets, though. The first is that this 2020 car is based on the AMG GT 63 S 4-door; a car that's already rabidly fast and obscenely exciting, lest we forget. And which Brabus already has an 800hp version of. The Rocket is far more serious an overhaul again. Because, in Brabus' own words, "there is nothing to replace displacement other than more displacement." Ain't that the truth.

So the AMG 4.0-litre twin-turbo V8 has been bored and stroked to 4.5-litres, the former of each cylinder now 84mm and a new billet crank increasing the latter to 100mm. With two new turbos (capable of 1.4 bar), ECU revision and a Brabus exhaust as well, the Rocket is producing a nice, round 900hp at 6,200rpm, or 260hp more than the standard car. That mighty torque figure wallops in at 2,900rpm. Don't forget this is based on a four-wheel drive AMG, too; that means Brabus reckons the Rocket can get to 62mph in a scant 2.8 seconds, 124mph in less than 10 and onto a tyre-limited top speed of 205mph. In a car that weighs 2,120kg. Madness. And it complies with the Euro 6D ISC-FCM emissions standard.

Naturally, the rest of the car has been modified to manage and contain that rampant output. A new range of aero parts should keep the Rocket stable at speed, redesigned intakes keep brakes and rads cool and a Brabus 'Airmatic Sport' suspension modules lowers ride height. Interestingly, the Rocket uses the standard GT63 brakes, surely a testament to how good the AMG ceramics are; they measure 402mm up front, and 360mm behind.

All of which is virtually immaterial, given how berserk the Rocket looks. Look elsewhere for subtlety! The carbon widebody adds 78mm to the width of the GT, bestowing upon it an "extravagant" look apparently, and the wheels are forged Brabus Monoblock Zs in either 21- or 22-inch diameter for "an optimal combination of lightweight construction and maximum strength." They're then covered with naked carbon aero discs which, if not to all tastes, surely complement the widebody drama quite nicely. Tyres are as you would find on the AMG, albeit larger, the Pirelli P Zeros measuring 295-section at the front, 335-section behind. The colour, in case you were wondering, is 'Stealth Grey'. Which may well be true for the colour; a widebody, 900hp Mercedes rather undoes any possibility of fading into the background.

As always, Brabus will oblige any request of the 10 owners when it comes to configuration; so, if Stealth Grey isn't for you, or the quilted leather, or the red accents, then they can be removed and anything else put in their place. As could reasonably be expected, for a vehicle that costs 427,000 euros plus taxes. Brabus is accepting Rocket orders now, and is promising a "spectacular" automobile; you don't say…