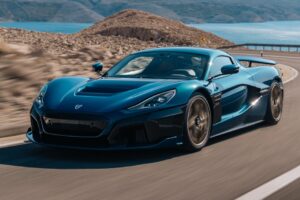 Some car makers are struggling with electrification, while others like Tesla and Hyundai are consistently knocking it out the park. Rimac, too. The Croatian company has just announced its second electric hypercar, with stats like something out of a video game.

From a standing start, the Rimac Nevera will hit 60mph in an astonishing 1.85 seconds. It’ll pass 100mph in just 4.3 seconds, and after just 9.3 seconds of flat-out acceleration it’ll be doing 186mph. Deeply impressive figures, as is the top speed of almost 260mph.

And yet, the Nevera won’t burn any fuel while out-accelerating a Bugatti Chiron. Instead, its absurd 1888bhp comes from four electric motors, which also give all-wheel drive and all-wheel torque vectoring. A 120kWh battery is fitted, giving a theoretical maximum range of 340 miles between charges – although clearly far less if you’re planning to test out its crazy acceleration figures.

We’re told the car will accept charging at up to 500kW. We don’t know where you’ll find a charger powerful enough to do that, but theoretically it means you could top up the battery from 0-80% capacity in just 19 minutes.

Stopping the Nevera takes huge 390mm Brembo carbon-ceramic brake discs and six-piston calipers, and Rimac reckons it has the highest level of regenerative braking of any car on the market. It also claims the Nevera has the most rigid structure of any car ever made, with the battery forming part of the structure.

There’s a near-perfect 48:52 weight distribution for agility and handling, plus seven different driving modes – Sport, Drift, Comfort, Range, Track and two additional custom setup options. Whichever one you choose changes how the car’s aerodynamics perform, with various flaps and wings all capable of moving independently of each other.

The Track mode not only brings maximum performance, but a new AI driver coach function aims to help you become a better racing driver. By analysing your driving performance, the system will find where you can improve, suggesting racing lines and braking points. It’s made up of 12 sensors, six radars and 13 cameras, and will be available as an over-the-air update in 2022, we’re told.

GT, Signature and Timeless versions are available, all with billet aluminium switchgear and three digital displays. Or you can choose Rimac’s ‘Bespoke’ programme to create a one-off car.

Want a Nevera? Only 150 will be built, each personally approved by founder Mate Rimac, and you’ll need around €2 million (over £1.7 million) before taxes and customisation.