Need suggestions: Automatic hatchback for a family of 3 women & a dog 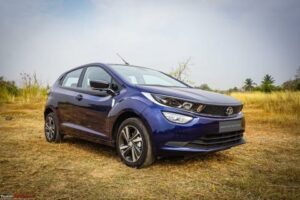 They don’t want to keep the Innova as it is gathering dust, and they would like to have a small automatic car so that it can be driven by mother and daughter.

BHPian carthick1000 recently shared this with other enthusiasts.

A good family friend contacted me to ask which one among the 2 should their family (grandmother, mother, daughter & dog) choose. Naturally, I am turning to our fellow BHPians to seek help.

As you can see, they already went through space+design+specs+prices of most of the cars in the segment and shortlisted the above 2. The family had an Innova (chauffeur driven), which was used by the father, who passed away last year (COVID). They don’t want to keep the Innova as it is gathering dust, and they would like to have a small car so that it can be driven by mother and daughter. The use case is mostly within city and very rarely outside. They would like to buy new.

Some reasons what is holding them back/leading them to one over the other:

Thanks on behalf of her family.

Here’s what BHPian Shreyans_Jain had to say on the matter:

The Jazz is too old to be recommended nowadays. Never know when it may be discontinued. It no longer has its USP (magic seats) either. The Altroz is a damn good car and the automatic is superbly well tuned. If the choice is down to these two, decision should be simple and straightforward in favour of the Tata.

A possible alternative can be the iMT equipped Kia Sonet.

Here’s what BHPian Rajeevraj had to say on the matter:

Between the two, I think it has to be the Altroz. It is a newer, crash tested, high on features car and perfectly suitable for the use case mentioned. Feature like Auto Park Lock will be very useful for relatively newer drivers.

On the down-side, as you mentioned, the dual clutch is a new one and most dual clutch systems whether from VAG Group, Ford or Hyundai have had a history of reliability issues. Having said that, since this is wet clutch setup, it should be more reliable and suitable for Indian conditions.

The Altroz seems to be the perfect choice.

Here’s what BHPian lamborghini had to say on the matter:

I may go against the tide and pick the Jazz : It is safe, light controls & easy to maintain, good visibility for city driving, has good ingress & egress & seating comfort for all age groups as well.

The Altroz is a great car, but the Jazz would be easier to live with for a non enthusiast family.

Another option I would consider is the Tigor EV.

Here’s what BHPian vigsom had to say on the matter:

If I were them, I’d go with the Jazz CVT. Peace of mind long term ownership, can be tended to at any FNG should Honda close down, and a super easy car to drive.

I’ll also throw the new Baleno into the mix, if they’re okay with an AGS (AMT).

Here’s what BHPian Eddy had to say on the matter:

Lady driven & lady passengers – I would place a premium on reliability. I would also bet on CVT instead of an AMT.

If you ask me – the Jazz is an obvious answer. Chances are, they will be happier dealing with Honda than Tata given that the family has experienced Toyota.