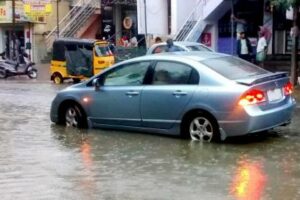 Should I get the engine overhauled or find another engine from a scrapped or totalled car?

BHPian frontech recently shared this with other enthusiasts.

The recent heavy rains in Bangalore, poor condition of the roads and the drainage resulted in my Honda Civic sucking up water. A bus moving through the road created a mini-wave and my car managed to suck up water through the intake. Of course, it stalled after that. Water got into the cabin.

This is a 2008 model and now I’m given an estimate of 1.55 lakh for repairs. With 50k for the engine overhauling itself. The car has done 80k+ kms so far. I have insurance that does cover natural calamities including flooding. I think they provide 50% coverage for parts provided there is a GST bill. I know for sure there will be no GST bill for engine overhauling and maybe many others as well (perhaps most items under the machine room and outside work).

The alternator is jammed, and so is the starter motor. I have included some pictures to show you the state of the engine and the clutch plate. The clutch plate is actually new and hasn’t done even 3k km.

Looking for some expert opinion on these matters:

Appreciate your input. Thank you in advance. Here’s what GTO had to say about the matter:

Buy something newer & nicer if you have the budget. If constrained, you could do a lateral upgrade to another Civic / Corolla. Cars are never the same after severe flood damage. My Sunny has been through two floods, so first-hand experience. Problems & issues kept cropping up, even a year after flood damage.

Here’s what BHPian Turbanator had to say about the matter:

You have to show that the car was flooded when parked, if the damage is while moving, you cannot claim under Insurance unless you have purchased specific protection for the Engine (water damage).

Not recommended to fake as not ethical (illegal too) besides, it will be hard to prove.

The best shot, try to find out an old running engine from an accidental car, otherwise, ask how much is the engine assembly from the dealership (half engine may be enough).

Here’s what BHPian Engine_Roars had to say about the matter:

It is an old car & water damaged at that, not worth investing time, efforts & money. No matter how much you spend, it will never be the same. If possible, think of replacing the car.

If at all, that is not possible for some reason, I hope you find a way out of this soon.

Here’s what BHPian M00M had to say about the matter:

I had an Alto which was submerged in floods once. We had purchased it for 3.4 lacs and the repair cost was 98000/-. We got an insurance claim of 95000/-. However, the car kept throwing some issues or the other every few months. It was a car which was used only very little, so we kept it and fixed it. We had it for 11 years but it kept throwing up some issues or the other, especially the AC which was never the same again.