Nardone 928 production kicks off next month 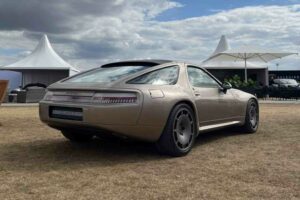 Got half a million quid to spare? We can think of many worse ways to spend it…

We’ve seen Nardone Automotive’s take on the 928 S4 prior to its latest showing at Salon Prive. Back in June, Matt remarked: ‘It’s a surprise this hasn’t happened sooner, really’. And that’s true, when you think of the restomod scene in general, and the number of Porsches that get reworked in particular. That’s all to do with 911s and 356s – the air-cooled stuff that people gravitate toward. Of course, this is a different kind of Porsche: water-cooled, front-engined and eight cylinders.

The French start-up, and its founder, Thierry Nardone, claim to be ‘serenely obsessed’ with Porsche’s late-seventies grand tourer bruiser. Its own take on the 928 has been remodelled with the help of BorromedodeSilva, the same firm that did the Amos Delta Integrale.

So what are the details, then? Right, well it’s based on a 928 S4 with 2,000 new components sitting underneath its aluminium (the material the doors are made of) and carbon fibre (what the rest of the surfaces are produced from) body. As a result of these changes, the car is said to be 100kg lighter than the original.

As you can see, there’s a new head and taillight design. This required a redesigned boot and a shorter rear window, and the rear is 60mm wider overall while the front is 80mm wider than a standard 928. The wheels mirror the original’s ‘manhole’ design. Those were 16 inches in diameter, and they tried not to go too big with the alloys, which is a rare thing these days. 17s is what they looked at to start with, but found that was too small to swallow the new Brembo brake kit that’s been installed. So 18s it was.

Then there’s the engine. It’s based on the 5.0-litre V8 from the S4 but with a shorter crank. Many more of its internals have been reworked, including a set of uprated cams. And to boost the power gains further – it’s said to be around 400hp now – it’s got a remapped engine management system. The gearbox is an interesting development. The casing from the original five-speed manual ‘box has been retained, but within that they’ve squeezed in an extra ratio. So it now has six gears and a limited-slip diff to handle all that oomph. The suspension is active and the power steering electric, while the tyres it comes with are Michelin Pilot Sport 5s.

Inside it’s the same basic layout as the original 928, including the original seats, but these have been reupholstered with a mix of high-end leather and suede. That said, this is a bespoke product, so what the customer wants, he or she gets. The instruments are digital panels that sandwich an analogue rev counter, which is more 911 than 928.

Production starts in September, with the first prototype (the car shown is just a model) due out towards the end of 2023. Customer deliveries should begin to come by early 2024. And the price? €48,000 before tax. Cheap, ain’t it, for a bespoke, remodelled Porsche? That’s what you get when you don’t use a 911 as the starting point. Oh, hang on…we’ve missed off a zero. It’s €480,000 plus taxes. Sorry about that. Still, nice to dream…

Nardone 928 production kicks off next month