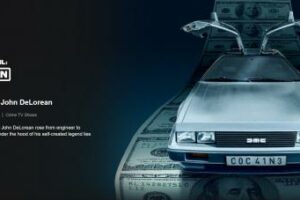 This is the story of the rise and fall of John DeLorean – a charismatic engineer who set out to build the car of his dreams.

Myth & Mogul is a documentary series that delves into the controversial life of John DeLorean – the man behind the famous DeLorean coupe that featured in the ‘Back to the Future’ movies.

Directed and produced by Mike Connolly, the series includes interviews of some of the most influential people in John’s life. These include his third wife, Christina Ferrare and son Zachary. Connolly has also taken inputs from Journalists Gail Sheehy and Ralph Nader as well as those who worked at his company.

DeLorean is credited for being the brain behind the Pontiac GTO. He left General Motors to set up his own car company in 1973, which came to be known as the DeLorean Motor Company (DMC).

The famous time machine from ‘Back to the Future’ was built from January 1981 to December 1982 in Belfast, Northern Ireland. A total of 9,000 cars were produced before DMC went bankrupt. The situation was so dire that John even resorted to cocaine trafficking to keep his company afloat.

This is the story of the rise and fall of John DeLorean – a charismatic engineer who set out to build the car of his dreams.