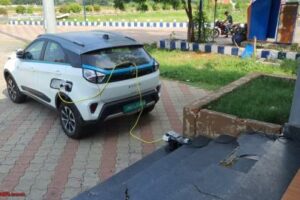 While Tata Power’s charging infrastructure is terribly error-prone and the user experience isn’t the best, I’m grateful it exists.

BHPian Kernelmann recently shared this with other enthusiasts.

I’ve owned the Nexon EV for a little over four months now, having booked it in Feb 2020 but deferring the purchase to June 2021 due to lockdowns. Acquiring the Nexon EV was the culmination of a 6 year+ wait through which I persisted with my ageless Opel Corsa Sail, waiting for the right EV to come along. My usage had been almost entirely urban with the occasional Mahabs run. So when I had a reason to visit my hometown, I opted to drive rather than fly. And that’s how my epic road trip came about. Travelling solo with luggage of about 60Kgs, I was entirely dependent on Tata Power (TP) Fast Chargers (FC) along the way. That was a gamble in itself as I had never done an FC at a TP point but had heard plenty of horror stories of inexplicable errors, especially with Exicom chargers. But the first big unknown was the absence of an FC between Chennai and Ongole which meant figuring out a slow charge (SC) somewhere along the way. The long road to Eden

Left home at around 0400 and drove without AC, averaging 60kmph to keep the Wh/km below 100. As I approached Nellore, I was already scouting potential SC locations. After a few futile requests to restaurants and fuel pumps, I finally got lucky at a CCD just after Manabolu and before Nellore, at around 0800. The sole attendant – a kind lady – allowed me to charge but had to inform her supervisor on the phone, who was much less cooperative. Despite my offer to pay (which was declined), I had to leave with just an hour of SC which barely topped up 10%. I did buy a can of CCD’s Red Bull clone energy drink for 100 bucks out of courtesy.

Video: Coasting along at golden hour.

Reaching the Velampalli FC beyond Ongole would be touch-and-go, hence I decided to stop at the Varalakshmi Motors showroom (which was right on the highway) to request some SC. But they didn’t have an appropriate outlet and directed me to their service centre in Nellore, which was a rather long detour. I ended up charging 90% which added almost 4 hours to the trip. The service manager insisted on opening a job card and I paid about Rs. 100 for the units consumed. Very professional! Charging at CCD. A 20m extension cable to the rescue.

Leaving Nellore at almost 1400, I finally reached Aavas Resorts, Velampalli after 1700. A few errors and calls to Tata Power helpline later, charging finally commenced. The Delta charger juiced up the batteries at a fast clip and an hour (and Rs. 425) later, I was finally on my way to my stopover for the night, Vijayawada which I arrived at around 2100. Left the hotel early and reached Jayalakshmi Auto MG Showroom at 0600 where I had my first encounter with the infamous Exicom charger. It is a different beast from chargers of the Delta make, with its own idiosyncrasies and error codes. But a little perseverance and the experiences of others on the Tamil Nadu Nexon EV WhatsApp group soon had me on my way. I must acknowledge the warmth shown by the security guard who took down my details in a register and invited me to wait in the customer’s lounge and upon my declining to do so, offered me a couple of bottles of water. A full charge set me back by Rs. 305 and I was hot-footing to Rajahmundry in no time. Reached Siva Sankar Tata Motors, Hukumpeta at 1100 and had my first error-free FC through the Delta charger which cost Rs. 544. And I was off to Vizag a couple of hours later. Reached the Croma FC at Siripuram Circle, Vizag by 1630 but the darned Delta charger just wouldn’t function. After wasting an hour dealing with a farrago of errors and a clueless Tata Power helpline, I had to abandon this outlet and headed to MG Tristar on Rushikonda beach. The owner Mr. Rama Rao was around and was most hospitable, despite one of the staff making misleading statements about the charger’s availability, I was able to achieve 100% SOC from its Delta charger for Rs. 545, in under two hours. Left Vizag at around 1930, and lay ahead of me the most daunting drive ever – 270+ km till the next FC in Berhampur. Feels good to be back on home turf.

The drive from Vizag started on a rather ominous note as I had to navigate the hills resulting in a high Wh/Km. But as the terrain levelled off, the DTE started to creep up and I was feeling more confident. An excruciatingly long and painfully slow all-night drive later, I finally arrived at the Tata Motors – Dion Automobiles Service in Ankuli, Berhampur at around 3 AM with 9% charge remaining. It took me over eight hours to cover 276 km using 91% charge, but I had crossed the chasm. I took a nap in the car as it charged up all the way to 100% in about 90 mins which cost Rs. 557, and I embarked upon the final leg of the journey from Berhampur at 5 AM. The early morning drive to Bhubaneswar was a breeze as I had fun through some bendy ghat roads and managed to click the rising sun to my right. I finally reached my destination at around 0800.